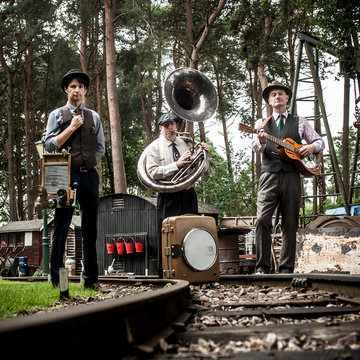 The Rigmarollers emerged on the London folk & roots scene around 2019 in the midst of a new wave of interest in the pre-war music of America. Their busy performing schedule has found them in demand at venues and events throughout the city including a run of shows for The Idler festival at the remarkable 17th century National trust property Fenton House. The Rigmarollers want to bring you along for a ride through the vintage sounds of America with deep Sousaphone Brass grooves, intricate string picking and virtuosic harmonica & washboard. Their repertoire jumps effortlessly from original songs that feel like old classics to early Jazz, prohibition Jug Band numbers, rousing Gospel singalongs and foot-tappin harmonica grooves.

Roll Your Own
Mr Crump Don't Like It
When Somebody Thinks You're Wonderful
Cider Time Rag
Croquet Habit Blues
Save Me Some
I Crave My Pigmeat
Nobody Knows You When You're Down
Wait For The Light
Dallas Rag
Ragged But Right
Fishing Blues
Bring It With You When You Come
Careless Love
Down By The Riverside
Trombone Rag
Sitting On Top Of The World
Get It Fixed Blues
Going To Germa
Innocent Road
Walking Stick
Pallet On The Floor
Dickson City Rag
Too Tight
Originals:
Money (What Money?)
Macadam Bill
Sycamore Street
Grandpa Joe
Southern Comfort
Duck's Blood

"Thank you Ewan and co for arriving in plenty of time for the event and generally for being the professional musicians you all are! Lovely music and perfect volume for our guests to enjoy whilst being able to talk too. I’m sure we’ll have you back again soon."

"Thank you so much for your wonderful playing at our wedding, you exceeded all expectations! We had so much fun dancing with our guests! A lot of our friends and family are musicians and we had lots of comments on the night about how great you were and we will certainly recommend you to anyone who asks!"