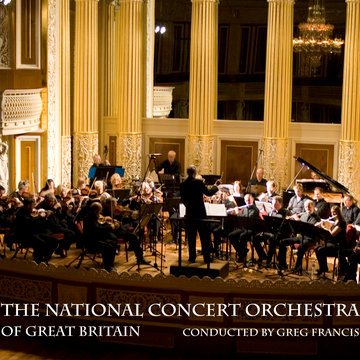 About The National Concert Orchestra of Great Britain

Symphony orchestra
Lancashire
The National Concert Orchestra of Great Britain, was set up in 2008. It's remit is to play 'popular and light popular music'.

The National Concert Orchestra of Great Britain was formed in 2008. It's original intention was to be the 'Orchestra in Residence' at the Grand Theatre in Blackpool. Due to a change in management and policy, the orchestra never took up residence but, it proceeded to work in a wide variety of musical genres. It provided the accompaniment to singers such as Russell Watson, played it's own series of concerts known as 'The Vienna Proms' for 2 successive years, provided orchestral accompaniment to the touring show 'Bat - the Symphony' also, for 2 successive years and, it was the only orchestra in Great Britain to present a centennial tribute to the most famous composer of light popular music - Leroy Anderson, musical director and conductor of the Boston Pops Orchestra. It's musical director/conductor is Greg Francis, who has conducted many great orchestras including the Royal Liverpool Philharmonic Orchestra and all of the B.B.C. Orchestras. Greg also uses many of the musicians in his own 'James Last Tribute Orchestra'. The range of music played is virtually from 'Last Night of the Proms' material up to modern popular orchestral shows such as 'ABBA - the Symphony'.

Symphony orchestras in the UK