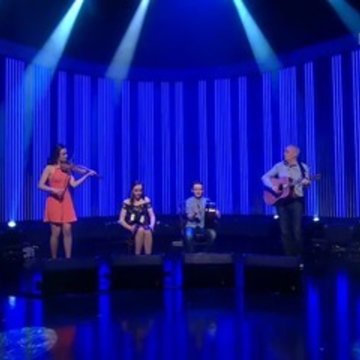 The Maguires is a lively and engaging traditional Irish music band from Wicklow, Ireland. Having played extensively in Ireland since 2014, The Maguires made their US touring debut in 2017, wowing audiences and receiving standing ovations in six states, including performances at Montana Folk Festival and Milwaukee Irish Fest where they played to festival crowds of c. 5000. "Insanely awesome" is how the Milwaukee festival organisers charaterised The Maguires performances. The band consists of three very talented, accomplished and experienced young musicians: Emma (18) on fiddle, flute and whistle; Aoife (16) on concertina and uilleann pipes; and Sean (13) on bodhran; with Dad, Philip, completing the lineup on guitar. The Maguires have a proven pedigree as crowd pleasers at festivals and their young ages belie their musical maturity and stage experience. The band has a fan base of over 42k followers on social media and they have had over 3 million views of their videos online.

The Maguires play a variety of lively traditional Irish tunes including reels, jigs, hornpipes, which are sure to get your foot tapping and perfect for festivals, concerts, corporate events, weddings, etc.. For quieter occasions, the band also includes some slower pieces, tastefully arranged with harmonies, and including some O'Carolan tunes among others. The band also loves to play familiar melodies, such as Jungle Book's "Bare Necessities", and morph them into Irish tunes.

It was a fantastic performance and worked really well on the show. (The Ray D'Arcy Show)

Kilkenny TradFest were thrilled to have Philip and the Maguires as part of our very exciting programme at this new and growing festival. Their performance on the main stage on St Patrick’s Day to over 8,000 spectators kept the crowd entertained on this music-filled day. They are all super musicians and a joy to work with.

The CoCo Markets Summer of Music was delighted to welcome back the Maguire Family Band for a second year. They really bring a great atmosphere to the CoCo Markets! All our customers truly enjoyed the music and the traders and staff couldn’t get enough! We’d highly recommend them for any event.

It was great to have a real live band playing at our awards ceremony and a bonus to have such a a talented family playing in County Hall, our historic venue. It really brought a sense of occasion to the night. Very positive feedback and very much look forward to having The Maguire Band back again.

These guys just light up the place when they play - an absolute pleasure to have had them visit.

The Maguire Band was a fantastic addition to the festival line up this year – their energetic set and skilled musicians created a wonderful atmosphere for the audience and was hugely enjoyed by all ages. The band was a pleasure to work with – professional and friendly throughout, from initial enquiry and booking to performance. If it’s lively trad you’re after, we’d have no hesitation in recommending The Maguire Band for any occasion! Thanks Philip, Emma, Aoife, Seán & Tracey!

What a treat for a group of visiting Americans - Traditional Irish music by an incredibly talented and charming family!

Such a treat to have the Maguire Family playing in the Polo Wicklow clubhouse. They brought a great atmosphere to the club and we had endless compliments from guests on how great they were. They even played the Irish and USA National anthems at the start of the polo match. The Maguire Band seem to have endless talents and are a joy to listen to. We would highly recommend them.

Celtic folk bands in the UK