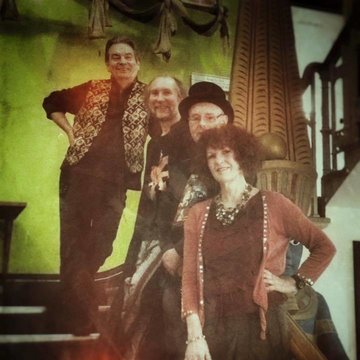 About The Legendary Ten Seconds

The Legendary Ten Seconds was originally a solo music project of Ian Churchward who has played guitar in various bands.
Folk-rock band
Torquay

The Legendary Ten Seconds was originally a solo music project of Ian Churchward who has played guitar in various bands after starting to play the guitar in 1979. Ian's first band was called Chapter 29 and after this band split up in 1986 he started a new indie pop band called The Morrisons later that year. This band released a flexi disc which was played on the John Peel show on BBC radio one in 1987. From the late 1990's until about 2007 Ian also played in a ceilidh band called Storm Force Ten which then became a new band called Phoenix. The music of The Legendary Ten Seconds is played in a mainly English folk rock style featuring songs usually written by Ian Churchward. The songs are recorded in Ian's basement at Rock Lee and at Lord Zarquon's studio in Chelston Torquay. Various local musician's help out on the recordings. In the past this had most notably been Guy Bolt on drums. Most recently Lord Zarquon has been assisting with valuable keyboard contributions, Rob Bright with electric guitar and banjo, Camilla Joyce with her singing and Tom Churchward on melodeon. Other musicians who have contributed over the years include Elaine Churchward, David Clifford, Rob Blaikie, Ashley Dyer, Gentian Curle, the Gentian sister duo and Steve Ley. Since 2013 The Legendary Ten Seconds recording sessions have focused solely on songs about the life and times of Richard III with a view to raising money for a UK registered scoliosis charity called SAUK.

Musically we're in the realms of trad-folk, and little else would fit. However, the band do allow more modern aspects to creep in. 'Lord Anthony Woodville' is pretty much a modern rock song with rock drumming and electric guitars. There's also the use of synths throughout the album to flesh-out the sound and touches like this prevent it from becoming too much like an olde-worlde folk album. The humour helps too, and serious folkies might not have included the post-celebration hangover that comes with the mutterings of "Ah, my head hurts, I'll have extra duties for a month for this one. I wonder who won?" at the end of 'The Battle Of Barnet Song'. For a man whose media coverage this past year has been so great, and who's had plays and societies dedicated to him, divulging the whole story here would be lengthy. Musically The Legendary Ten Seconds successfully combine their modern guitar sound with traditional music of long ago. The instrumental 'Fanfare For The King' is indeed a grand brass fanfare, but it also includes modern instruments, and like much of the album sees two worlds colliding. There are plenty of surprises in terms of sound and much thought to the lyrics. A folk-rock opera about a historical figure might not look good on paper, but by bringing past and present together musically and having a great command of atmosphere, The Legendary Ten Seconds have managed to pull it off.

This album is not just a treat, it’s a royal banquet, both for music lovers in general and for Ricardians in particular. Richard’s life is celebrated with superior tunes, lyrics and production. The music is peculiarly intimate, as if you are in the room as it is being played. It is also novel, exceptional and well worth hearing. You may not like folk or rock, let alone folk-rock, but if you give it a chance, you may be very agreeably surprised.

Since the discovery of some old bones in a car park captured the imagination of the British public, king Richard III has become one of the most well known of the historic monarchs, joining the ranks of Elizabeth I, Henry VIII and Victoria. Writing an album about his life may well reek of prog, and may also be quite a task, but it's one that Torquay band The Legendary Ten Seconds (actually members of cult indiepop group The Morrisons) have proven themselves more than up to. 'Tant Le Desiree' is their second LP about the last of the Plantagenets in the space of a year. Milking the concept a little too much? Well, not really if you can go into this much detail. Unleashing their inner folk traditionalist sides, this record about "a hunchback with a withered arm" is narrated by Richard III's mother (not his real one obviously, as the old dear would be getting on a bit now. Mind you, we could have done with her to identify the body, thus saving months of DNA tests and so on). It's difficult to tell if this is a spoken word album punctuated by music, or a musical tale with narration between songs, but it's with a perfect voice and excellent depiction that the story is told, focusing on the grief of the loss of a son in battle - one who barely survived infancy - and who was let down by many people supposedly close to him. This really is a proud mother's account of a son who fought valiantly and performed heroics before his unfortunate downfall, and it's filled with emotion. There is music aplenty though, and much of it is folk of ye olde variety. It's not quite all lutes and harpsichords, but the air of days long ago bursts forth, even with the use of modern instruments including electric guitar solos and even synths at times. We move from shanty-like tracks to more rural folk and even touch on prog on occasion. It's difficult to knock the music because much care and attention has gone into these arrangements, bringing in plenty of variety of sound, and much work in uncovering the facts of the story they wish to tell. It's a Herculean endeavour of research. Whether or not a chronicle of this kind is something that you'll wish to listen to on heavy rotation will depend on personal taste, although it's perhaps unlikely despite the quality and thought that's been ploughed into this project, but you can't help but doff your cap at the effort and execution. If your history GCSE requires coursework about this particular ruler, then this album and its predecessor, 'Loyaulté Me Lie', could make for far more accessible and interesting ways to learn than any textbooks.