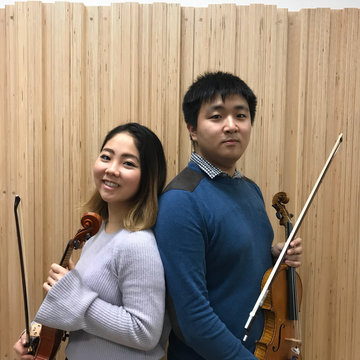 About The Kopan Duo

Young and versatile violin duo based in Birmingham able to play a variety of different styles from classical to pop on request!
String duo
Birmingham

The Kopan Violin Duo are an emerging talented duo comprising of Risa Sekine and Mark Lee both based in Birmingham. Both attend the Royal Birmingham Conservatoire on significant scholarships with Risa being awarded a full international scholarship to study in the UK. Specialising in ensemble and chamber music playing, this duo is the latest in many collaborations that the pair have made in the past with other notable achievements involving coaching from members of the internationally acclaimed Heath, Gildas, Castalian, Lindsay, Arod and Ebene quartets as well as the Schubert ensemble and the Eblana string trio. Performing in small ensembles on a regular basis, Risa and Mark are respectively part of the Sekine and TSR quartets, having showcased full works across Birmingham on a frequent basis. They have also considerable orchestral leading experience with Risa having led the Orchestra of Solihull Schools in concert and Mark having led SCYO and VaCO and principal 2nd violin for CLYO and CBSO Youth in the past. Versatility is something that they both pride themselves in as not only have they performed the largest classical works such as the symphonies of Mahler, Tchaikovsky, Brahms and so on but also have experienced a wide range of musical styles and therefore can easily integrate the vast majority of musical styles in to their playing. Having played in productions of West Side Story, Fame, The Marriage of Figaro, Hansel and Gretel, as well as countless numbers of popular style concerts involving Star Wars, James Bond, Hollywood to Broadway styles and pop songs and more, you can be certain that whatever style they perform, they will be able to bring vitality and energy!

A serious and highly talented musician... recommend highly with no reservations.