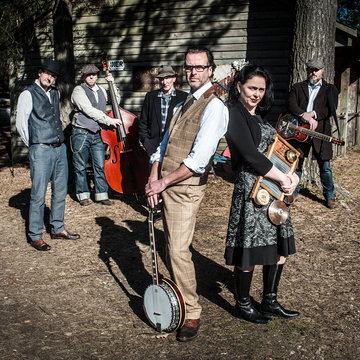 About The Dustbowl Sinners

From the unrelenting windswept plains of Byfleet & New Haw, and the brutal wilderness that is Staines-upon-Thames, comes the musicians' collective known as "The Dustbowl Sinners". The playing of soulful Roots and Americana music most Thursday evenings after tea, has become their only release from the merciless savagery of day to day existence in the abyss of wretchedness that is the North Surrey / South-West Middlesex delta. Formed in the dark winter nights of early 2018, "The Sinners" contribute thusly: Peter Harmer - Banjo, Mandolin and Guitar (the weird banjo kid in "Deliverance" was actually inspired by Peter after the film's writer happened to see Peter busking outside the Worplesdon Co-op back in the mid sixties). Alex Tedesco - Guitar and Preachin' (If it's in Am and didn't quite make the top 40 then Alex probably wrote it). Having served more than 20 years for dealing in counterfeit art, he spent his incarceration wisely and established a neon-sign business servicing drinking establishments round the globe. If you've ever walked into a bar and see a flashing neon sign "Liqueur in the front - Poker in the rear" then you've seen Alex's bar room Magnus-Opus Stefanie Penkey - Accordion and Washboard (poached from a local Bavarian style yodelling choir). A wealth of German folk-lore knowledge, Steffi knows both German jokes. Given the correct number of Mojitos, Steffi makes wistful use of a giant pretzel as a percussive musical instrument. Al Butler - Harmonica (retired session musician - remember the intro from Karma Chameleon?). An aficionado of classic vinyl, Al "The Hat" Butler holds the current world record for the most consecutive 'plays' of "Ragged but Right" at which time he coincidentally broke the world record for the most consecutively consumed pina coladas (273 over 27 hours and integral to the vinyl record). Ed Gallagher - Dobro (Ex Nashville session guy, moved to Staines when the work dried up after the stylophone was replaced by the pedal steel guitar as the primary sustanic country music instrument of choice). Ed has since developed a Pedal-Stylophone, however this remains the "world's most overlooked instrument"... according to Ed at least Ewan Penkey - Double Bass (Played 2nd Cello to Julian Lloyd Webber, then picked up the wrong case at an airport). A pioneering radio DJ (St. Peter's Hospital Radio), Ewan pioneered the radio phone-in format with his triple Grammy award winning show "Penkey's People" which also gave Nicholas Witchell his first 'break' in show business.

To a certain degree. We can perform completely acoustically, or also have a portable, battery-powered PA which can be set up very quickly.

We are happy to discuss setlist options in detail.

We have a high quality PA system, which is included in the price. Lighting is an option which we can provide at an extra cost.

If a song isn't included in our song list there may still be a chance we already know it. If there is a special song you'd like us to learn we may be able to do this for you.

This band is incredible!

Quality set at Blues at The Barns I loved Old Number 7 and any band that gives me free Bourbon is Great in my eyes.

If I could fill the hall, I'd have them back every week! Great people, great music! Looking forward to seeing them at the Vintage Nostalgia Festival soon!

Still can’t believe they’ll be playing the Americana festival at the FieryBird venue in Woking in September They’re great!!!