The Clothworkers Consort of Leeds 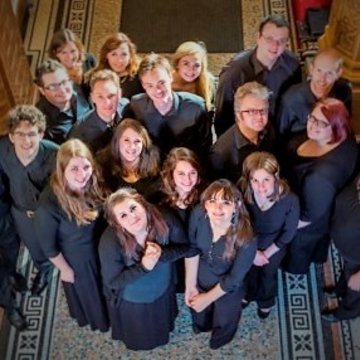 About The Clothworkers Consort of Leeds

The Clothworkers Consort is an auditioned chamber choir based at the historical Clothworkers Centenary Concert Hall, University of Leeds
3 of 10 photos
Choir
Leeds
Public liability insurance of £40 million
Verified profile

The Clothworkers Consort of Leeds (formerly Leeds University Liturgical Choir) was formed in 2001 by Bryan White, Stephen Muir and Philip Wilby as a chamber choir which included the performance of sacred choral music in liturgical settings as one of its important aims. Since that time, the choir has developed into one of the finest choral ensembles in the north of England. The choir performs at services and gives concerts; it has also collaborated with a range of professional ensembles including Fretwork, QuintEssential Sackbut and Cornett Ensemble, Skipton Camerata and Leeds Baroque Orchestra. In February 2009 the choir gave two performances of Purcell’s Dido and Aeneas to capacity audiences at Temple Newsam House. The opera was produced by Jack Edwards (Opera Restor’d) and the principal roles were drawn from the choir. In June 2009 the choir joined with Rambert Dance Company and London Musici for premiere performances of Howard Goodall’s Eternal Light at The Grand Theatre in Leeds. The Clothworkers Consort has previously sponsored an annual choral composition competition, funded by the Leeds Philosophical and Literary Society. Winners in recent years include ‘Inscription for a wayside spring’ (Wayland Rogers, 2008) and ‘Gabriel fram Hevene-King’ (Terry Mann, 2007), the latter of which has recently been published by Oxford University Press in the collection The Holly and The Ivy: 14 Contemporary Carols. The choir has performed in a variety of prestigious venues throughout the UK (St. Paul’s London, York Minster, Bath Abbey, Shrewsbury Abbey, Bristol, Chichester, Durham, Ely, Leeds, Lichfield, Lincoln, Salisbury, Truro, Wakefield, Wells, and Worcester Cathedrals, the Howard Assembly Room, Leeds), and has participated in the Beverly Early Music Festival and the Pennine Spring Music Festival. It also tours abroad, travelling to Prague, Czech Republic (2005 & 2016) , Poland (2005 & 2011), Rhineland Germany (2007) Mantua, Italy (2009) and Budapest, Hungary (2013). The choir has recorded three CDs: Songs of Praise: Music from the West Riding (2004), Vox Dei (2006), and No Man is and Island (2008). The choir recently appeared on Corinne Bailey Rae’s second album, The Sea (2010), and has recorded the title music (by Stephen Kilpatrick) for Michelle Lipton’s play Amazing Grace, broadcast on BBC Radio 4′s Woman’s Hour in June 2010. In 2013 the choir celebrated the Britten Centenary with performances of A Hymn to St Cecilia and A Boy was Born. In 2014 it performed for the second time at the International Medieval Congress, and in 2015, it joined the Skipton Building Society Camerata for the first modern performance of Philip Hayes’s The Judgment of Hermes (1783). In 2016 the choir undertook a residency at Salisbury Cathedral and participated in the Performing the Jewish Archive project with concerts in Leeds, York and Prague; and in 2017, CCL made its Wigmore Hall debut in a programme of Music on the Brink of Destruction, subsequently broadcast on BBC Radio 3.

Steve, I don’t know where to start, I could cry now thinking about how fabulous and magical your choir sounded on our wedding day, it’s literally all people have been talking about. The two songs whilst singing the register were just magical. I have never been to a service that’s so full of tears and smiling in one go. Seeing our guests going from sobbing to smiling and clapping along will stay with me forever. I’m just bursting with happiness about how amazing you guys were. All in the choir had big smiles on their faces and seemed to genuinely enjoy it themselves – you see it so many times these days when people get paid to turn up and provide a service without any emotion. I’ve only ever seen my Dad cry twice in my life and he was an emotional wreck on the day.”

I just wanted to drop you a line to pass on a huge thanks to yourself and all the choir members for the beautiful music at our wedding last week. The singing was fabulous and so moving. Even the roughty-toughty men of the congregation told us after the ceremony how touched they were!!! Having you guys there really made the wedding service something special and so enjoyable – now I just can’t wait for our DVD to hear it all over again! And an extra special thanks to you for going the extra mile prior to the wedding by being so good at keeping in touch, making such great suggestions, and attending the rehearsal – thank you!

Choirs in the UK
Choirs in Wakefield
Choirs in Bradford
Choirs in West Yorkshire
Choirs in Harrogate
Choirs in Huddersfield
Customer Service
Discover
Company
As seen on
© Encore Technologies, Ltd.
Crafted with bagels and in London