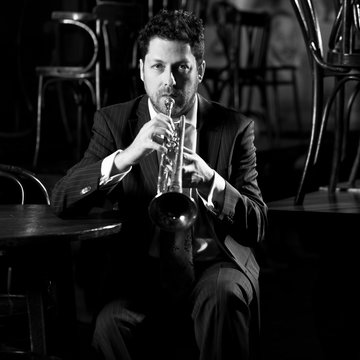 About The Brant Tilds Quartet

The Quartet is an international group based in London and led by Detroit born trumpet player Brant Tilds. We perform everywhere.
Original artist
Bedford
Public liability insurance of £10 million

Trumpet player and percussionist Brant Tilds was born on a U.S. Air Force Base in South Carolina during the Vietnam War. He grew up in Detroit, Michigan, and started sneaking into bars and clubs at 15 to play at jam sessions, and joined the Musicians’ Union at 16. After graduating from the Interlochen Arts Academy, and then Indiana University, he moved to Los Angeles, California, to study with Charlie Haden at CalArts. There, he led his quintet, and his 10 piece group Latin Monster with Humberto Gomez Vera, and performed at various clubs and festivals around Europe. During this time in Copenhagen, Brant wrote a number of pieces for audio and video release (Zentropa Films)as well as recording on principal trumpet with the Dansk Radio Underholdnings for film soundtracks on Metronome, leading his quartet at the Copenhagen Jazz Festival, and premiering the Poul Erik Christensen Trumpet Concerto. Since his move to England in 2004, he’s performed at festivals and halls around Europe with acts from the Latin world such as Cheo Feliciano, Los Hermanos LeBron, Roberto Pla to the London Early Opera and a modern classical trumpet and piano duo (with a soon-to-be-announced-very-exciting program!) and released his 2nd CD as a bandleader, GREEN GOLD. Currently he’s working on an Arts Council England project in collaboration with The Bear Club in Luton, performing the first Sunday of each month with his Quintet.

All of Me
All The Things You Are
Alone Together
Autumn Leaves
Billie’s Bounce
Black Orpheus
Blue Bossa
Body and Soul
But Not For Me
Bye Bye Blackbird
Cherokee
Confirmation
Days of Wine and Roses
Doxy
Fly Me To The Moon
Footprints
Four
Have You Met Miss Jones
How High The Moon
I Hear a Rhapsody
I Love You
I Remember You
I’ll Remember April
I’m Old Fashioned
If I Should Lose You
If I Were A Bell
In A Mellow Tone
In A Sentimental Mood
It Could Happen To You
Just Friends
Misty
My Funny Valentine
Night and Day
Oleo
On Green Dolphin Street
Recorda Me
Satin Doll
Stella By Starlight
Scrapple From The Apple
So What
Solar
St. Thomas
Sweet Georgia Brown
Take The A Train
The Girl From Ipanema
There Is No Greater Love
There Will Never Be Another You
Up Jumped Spring
What Is This Thing Called Love
Yesterdays
The Brant Tilds Quartet

Perfect was to celebrate my big day. Coms were excellent and they even performed a special request which was something way outside their repertoire. Very professional and ticked all the box's Bottom line. Would I book again? Yes, without hesitation.

Tilds is the sort of person who takes care of business. Details get followed up, commitments are met. He practices, composes, reads the small print. This is a dedicated, sophisticated musician, not some spaced-out bebop hippie — although he’s plenty hip. Mike Zwerin- New York Times

What a beautiful sound."