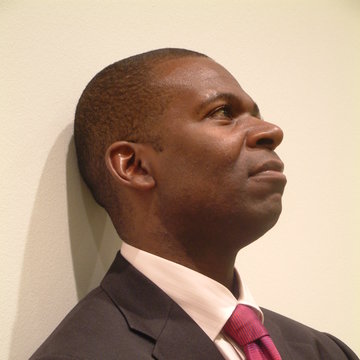 About The Basil Hodge Trio

Basil's interest in music started at the piano at an early age but his quest to become a jazz musician started in earnest when he undertook classical training from late 1978 to early 1983. Basil then studied jazz privately with pianist/composer Tim Richards between 1986 to 1989 before rounding off his training at Goldsmiths College in London, 1991. His professional career started in the summer of 1993 as a freelance musician and by leading his trio. Steadily he rose up the ranks to play with some of the leading UK players such as Jim Mullen, Tony Kofi, Dave O'Higgins, Pete Wareham and Renato D'Aiello. In November 2003 Basil produced and released his debut CD 'My Guardian Angel' featuring his quintet and original compositions, which led to a distribution deal with New Note Records. The CD received critical acclaim and air play. Basil has been leading his bands (trio, quartet and quintet) since 2000 and he has performed in such venues as the Royal Festival Hall, Queen Elizabeth and National Theatre Foyers, the Swanage and Ealing Jazz Festivals, The Vortex Jazz Club, The Crypt, Boxford Fleece, Watermills Jazz, The Bonnington Theatre and the Brighton Jazz Club. Basil also did a three year stint - solo piano/piano duos at The Savoy and Claridges hotels. Basil produced his second album 'Sound Reasoning' which was released on 26 October 2009, distributed by Proper Note Ltd. The CD displays 10 more fresh and exciting originals from Basil's pen which confirms his stature as an established composer. The tunes cover his varied approach to jazz incorporating the blues, groove, latin and modern styles. 'Sound Reasoning' received rave reviews including a 4-star rating from Jack Massarik (Evening Standard), Basil appeared on Claire Martin's Jazz Line Up show (BBC Radio 3) to talk about his new album and musical influences. He also performed a solo piano piece for the programme. Three of the main jazz DJs from Jazz FM, Helen Mayhew, Mike Chadwick and Sarah Ward have all recently played music from Basil's 'Sound Reasoning' CD. Basil continues to work with his quintet, quartet and trio as well as a freelance musician. Basil's partnership with Tony started in 1999 and remains strong and vibrant to this present day. His current quartet featuring Tony Kofi - Saxophones, Larry Bartley - Double bass and Winston Clifford - Drums and his trio without the saxophone, have been playing at clubs and festivals throughout the UK since 2006 Basil's bands are an exciting tight, hard swinging unit in either the standards/American songbook, post-bop or Afro-Cuban vein.

Jazz: The American Songbook and Jazz Classics from the 20's to the 60's i.e, Gershwin, Porter, Berlin, Ellington, Ella Fitzgerald, Miles Davis etc.
Soul/R&B: Motown, Stevie Wonder, Tina Turner, Nile Rogers, Kool and the Gang etc
STANDARDS
It Don't Mean a Thing
Summertime
Almost Like Being Love
Some Day My Prince Will Come
Recada Bossa Nova
Love For Sale
Isn't She Lovely
Body and Soul
A Nightingale Sang in Berkeley Square
It Could Happen to You
The Girl from Ipenema
Wave
Once I love
If I were a Bell
The Song is Ended
I Remember April
Loverman
Nice Work if you Can Get It
There is no Greater Love
Caravan
Fly Me to the Moon
My Foolish Heart
Softly as in a Morning Sunrise
You and the Night and the Music
Goodbye
Willow Weep for Me
Lulabye in Birdland
Love Walked In
Invitation
Yesterdays
In a Sentimental Mood
MODERN jAZZ and ORIGINALS
House of Jade
Habanera
Sensations in G
Regrets
My Guardian Angel
It's Up to You
Bluesette
All Blues
Hi Heel Sneakers
Gee Baby Ain't I Good to You
A Mode for McCoy
Tear of Joy
Intimcay
Lament
Intimacy
SOUL/R&B
Lady Marmalade Fm
We Are Family A
Valarie Eb
Ain’t Nobody Em
I Feel Good C or D
Mustang Sally C
Mas Que Nada Fm or Gm?
Disco Inferno C
Superstition Em
Signed Seal Delivered F
Master Blaster Cm
I Wish Ebm
Car Wash Dm
What’s Going on E
I Heard it Through the Grapevine Em
Simpley The Best F
Street Life Fm
All Night Long G or Ab?
Get Lucky (Original Key)
Walking on Sunshine (Original key)
Inner City Blues Ebm
Is This Love F#m
Knock On Wood E
All Night Long G or Ab?
Boogie Oogie Oogie
We’re Lost in Music
Young Hearts Run Free – Candi Staton
You Can’t Hurry Love
Stop in the Name of Love
I want your love chic A
My Girl C
I want to break free ( Queen)E
Son of a Preacher Man A
Midnight Hour E
Proud Mary D
Monkey Man A
Do it to the music (Raw Silk)
Thinking of You Bb
We are family A
Waiting in Vain C
Feel like making love -C
I want your love chic A
Pressure drop ( toots ska version) Ab
My Girl C
Natural Woman Bb
I want to break free ( Queen)E
Long Train Running Gm
Golden
Falling
I Love You More than You'll Ever Know

Standard Prices
4 musicians
All prices include:Travel and PA Equipment
Packages
Drinks reception3 musicians
Two performances of up to 45 mins each during your drinks reception
£600

“Basil Hodge whether it’s his quintet, quartet or trio,have thrilled audiences throughout the UK with his charming compositions and emotional hard swinging performances.