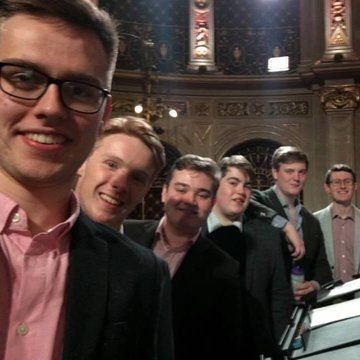 About The Back Row

London
A capella male vocal ensemble, formed of choral scholars with the Choir of Royal Holloway.

The Back Row has been a project close to the hearts of Royal Holloway’s Choral Scholars for a number of years. As well as working with ensemble in residence, The King’s Singers, since September 2014, the choir frequently sings in smaller groups, allowing them to gain experience of this special way of performing. A capella group singing is a different discipline from choral singing, as it requires more concentration and effort for each singer to coordinate their sound with that of the group. Alongside studying for degrees, and devoting a lot of time to Royal Holloway’s Chapel Choir, our group are committed to performing a variety of sacred and secular repertoire, and we look forward to sharing the results of this project with you.