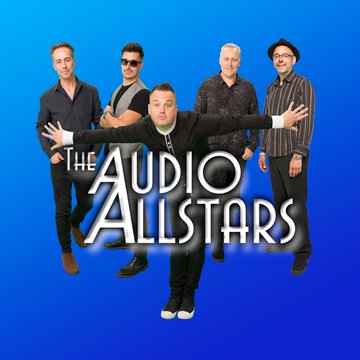 About The Audio Allstars

The Audio Allstars are a premium-quality events band based in the South, UK. We play modern chart hits as well as classics from the past!
3 of 17 photos
Party band
Bournemouth
Public liability insurance of £10 million

The Audio Allstars began when Gavin Munn mentioned to Gavin Courtie he had a plan - to form the best function band and event band! Gav M's experience touring the UK and the world as the Green Day-endorsed band "Green Dayz", and before that as the award-winning UK's No. 1 Tribute (Robbie Williams), together with Gav C's experience as a touring & session player, they believed in an event band that would bring the same energy, excitement and performance levels as any stadium concert. With their connections among other players It didn't take long to find other professional musicians who could see the potential for this idea, and The Audio Allstars were born! The Audio Allstars' ability to fill the dance floor comes from their skill and experience in understanding "what works" at each event - and one thing Gav M and the band know how to do well is getting a crowd to enjoy themselves! The band's performances are full of audience interaction, great musicianship, energy, crowd-pleasing never to be forgotten experiences!

No issue. We are very flexible

Happy to chat through this with you ... we know what works though and our setlist is designed for maximum impact! You can tell us what you DONT like!

Yes we can, given enough time.

Anyone that is fun and engaging ... we have a little bit of everyone in our performances!

JB
Jamie B
5 years ago

Absolutely amazing band. From the moment I booked up until the special night for my hubby, nothing was too much trouble for them. Lovely guys who would do anything to make you're night as perfect as it could be. Thank you thank you thank you for being the best band I could have asked for. I will recommend you to everyone!!

AB
Alison B
5 years ago

Absolutely awesome, we had the guys play at our wedding and from start to finish they were a pleasure to deal with. Nothing was ever too much (they even learnt 2 new songs for us and nailed both!) Everyone was up on the dance floor all night and commented on how good you guys were. Thank you again for making our day even more awesome.