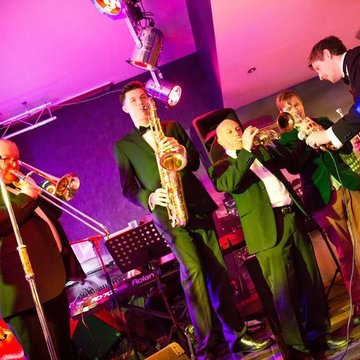 Being such a fan of Louis Prima and having played trumpet with The Jive Aces, The Bevin Boys, The Three Belles and The Glamophones it was inevitable that Antonio should form his own band, the Antonio Socci Jive & Swing Band. Recreating some of the fantastic sounds from the 40s & 50s, Antonio can often be found hopping tables with other band members and delighting audiences with his natural charm and sense of fun. The band recently completed a successful residency at Manhattan Suite, Birmingham and perform as a 7, 8 or even 9-piece Jump, Jive and Swing band. Antonio's debut album has been played on over a dozen local BBC Radio stations and on BBC's Elaine Paige on Sunday show. Antonio & the band can provide the full wedding day package, from ceremony music to background dinner music, to the full after dinner Jive & Swing band. Other credits include BBC Songs of Praise, The Big Breakfast and tours of Europe with The Bevin Boys, Rosemary Ashe and The Jive Aces. Corporate clients include events for HSBC, Birmingham City Council, the National Memorial Arboretum, Drayton Manor Park and the IM Group. With years of experience performing in dance bands and jazz bands, Antonio's band can provide the perfect intimate jazz setting with or without vocalists or can recreate the ballroom dance band era with a full band sound. Looking for a 20's themed Gatsby party? We've got you covered here too and will take you back to the roaring twenties! Get in touch for a quote and a chat about how we can make your event even more fun!

Come Fly With Me
On The Street Where You Live
Have You Met Miss Jones
That's Amore
All Of Me
Carina
Save The Last Dance For Me
Sway
I Could Have Danced All Night
S'wonderful
The Lady's A Tramp
Around The World
I Wanna Be Loved By You
Too Darn Hot
He's A Tramp
My Funny Valentine
All I Do Is Dream Of You
L.O.V.E.
French Poodle
Hello Dolly
Hello Young Lovers
The More I See You
I Wish You Love
I Love You, Samantha
Quando, Quando, Quando
It Had To Be You
Moon River
Answer Me, My Love
Almost Like Being In Love
You're Nobody Till Somebody Loves You
Crazy Rhythm
Smile
When You're Smiling
Cabaret
Fools Fall in Love
I'm in the Mood for Love
Buona Sera
Sweet Sixteen
Too Young
I Love Paris
C'est Manifique
La Vie En Rose
Strangers in the Night
QUICKSTEPS
Diamonds are a Girls Best Friend
Talking Picture of You
Hello Young Lovers
Zing went the Stings of My Heart
Zip-a-dee-doo-dah
Bill Bailey
How High the Moon
S'Wonderful
It's Only a Paper Moon
Thank Heaven for Little Girls
Home on the Range
When the Saints
Honeysuckle Rose
Music, Music, Music
Midnight in Moscow
Chicago
Tangerine
Whispering
Cabaret
For once in my Life
This could be the start of something big
Deed I Do
I Love Paris
Sitting on Top of the World
Bring me Sunshine
My Old Man
Strike up the Band
Bye Bye Blackbird
Hello Dolly
Mame
Falling in love with love
Mr Sandman
Yes Sir that’s my Baby
Tie a Yellow Ribbon
Isle of Capri
Lazy days of Summer
Please don't talk about me when I'm gone
Second Hand Rose
Lot of living to do
Somethings gotta give
Sweet Georgia Brown
La vie en Rose
Misty
Hasta Manana
Shine
My Blue Heaven
But not for me
Who's Sorry now
Mi Lord
Wonderful Day Like Today
It only Happens
Let's face the Music and Dance
I could have Danced all Night
You do something to me
I can't give you anything but love Baby
Help yourself
Black Magic
Ma she's makin eyes at me
Buona Sera
Indiana
Trudy Fair
Black Eyed Susie
In a Mountain Greenery
There will never be another you
A Fine Romance
Lover come back to me
Crazy Rhythm
I get a kick out of you
Happy days are here again
All I do is dream of you
Dinah
So what's new
Button up your Overcoat
Change Partners
Things
Arriva Derci Roma
Avalon
Sunday
Blue Ridge
C'est Magnifique
If you were the only girl in the World
When your smiling
Bring me Sunshine
Lady is a Tramp
Customer questions

We strive to make sure the line-up you see is what you get on the night. We do have auditioned 'dep' musicians available in case a band member falls ill or is unavailable. As a professional band our reputation means everything so you can be confident that all of our players are of a very high level.

Our line-up is Piano, Bass, Drums, Sax, Trumpet, Trombone, 2xVocals. We also can expand the band with 9, 10 and 11 piece options that include Guitar, Sax (II) and Percussion.

Yes we can provide this service for free before our set starts and in the breaks.

We tend to work with tried and tested set lists that build the enjoyment and atmosphere through your event. However, we're very happy to discuss an set list order with you.

Our PA and lighting system is included in your quote.

If you can not see a song you would like on our list, we may still already know it. If you would like us to learn a song in particular that we do not know we are happy to do this. There will be a small fee of £35 to account for for rehearsal time.

All prices include:PA Equipment, song choices from our repertoire

Hi Antonio, Many thanks for your great music for my Ball. It made a huge difference to the evening and I think you had a few enquiries that hopefully will get you some more engagements. Please pass on my thanks to Andrew and the rest of the band. Best wishes for further success!

What a wonderful evening of entertainment! I recommended this talented band for my sister's birthday party and she was over the moon! The variety of songs, the quality of the musicians, excellent vocals made the night literally swing! They were also very professional and polite when setting up and waiting to go on stage. The venue was quite small but that didn't bother them at all. A pleasure to book them. Thank you so much!