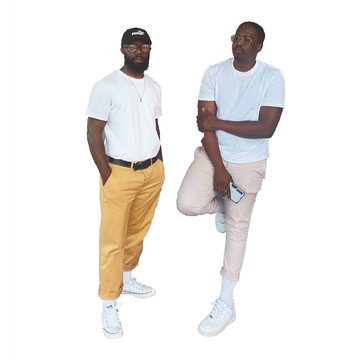 Team Salut, are producers of Global hits "Drogba/Joanna", "Dance for Me", "Vroom" and name more. They're ready to rock your event!!!

DJ/Production duo; responsible for global Afrobeats hit, Joanna (Drogba) by Afro B... Team salut are an Afro-Electronic duo from South West London. The duo, GKP and Mr Wood are of west African descent, namely Sierra Leone and Ghana. This mix of upbringing and culture forms a large part of the Team's versatility and eclecticism. Team Salut have a number of awards/certifications, as well as having worked alongside some of the biggest names in African music including Afro B, Wizkid, Davido, Eugy, Mr Eazi and many more. Styles played include Afrobeats, Afro-Tech, AfroHouse, Amapiano, Dancehall, Raggae, Funky House, UK Garage (UKG), Hip-Hop, RnB, Trap, Drill etc. #afrobeats

Our clients love our diversity and ability to switch from open format to genre based mixing. We always have selections to get people singing, moving and enjoying their experience.

No. Our brand is consistent so you can always know what to expect. When you book Team Salut, you'll have access to us exclusively (Mr Wood & GKP).

We always try our best to be flexible to help ensure your event runs as smoothly as possible. If timings change slightly in the run up to the event just let us know AT LEAST 48 hours prior to our start time.

Yes. This will simply be chargeable as additional performance hours (£350 ph).

So long as the venue is in order and we are not required to bring any gear, it should take no longer than 10 minutes to get setup and begin playing. However, if you require our equipment, we recommend allowing a setup before the event to avoid interruptions. If this is not possible, at least 1hr before set time will allow for any problem solving if needed.

Yes. One of the strengths of being a duo is the ability to split the work load. This means that we can often swap our positions on decks and microphone. This allows us the flexibility to roam as we perform if we so choose.

Our set lists are crafted from countless performances and learning what works best in our scene. However, we're definitely happy to chat through and make sure we find what works for your event.

No. We expect that this will be provided by the venue or booking client. Some equipments can be provided for an additional fee.

Standard Prices
2 musicians
All prices include:Full set without any equipment. When booking, you must include all necessary gear unless specified. Standard booking only includes DJ set with provision of music/songs, not equipment.
Packages
1 hour pre-recorded unique and exclusive DJ mix2 musicians
We will make you a curated a tailored DJ Mix as per your specification. Price is per hour
£150
DJ / music production lessons2 musicians
At £150 per hour, we are willing to share our award winning expertise with any candidates looking to make a big transition in music.
£150
Wedding ceremony2 musicians
This includes music before the service begins, music during the signing of the register, and music as guests leave. This represents a 4 hr window where we will MC and play to our clients satisfaction. If you require more or less than 4 hours, please contact us directly.
£1200
NEW!Virtual services
Digital DJ / production lessons
£150 hourly rate for lessons via zoom, teams or whatsapp.
£150

TG
The G
4 months ago, for a Bar / Club / Venue event in Overton's Yard

Wonderful 2hr set, enjoyed so much