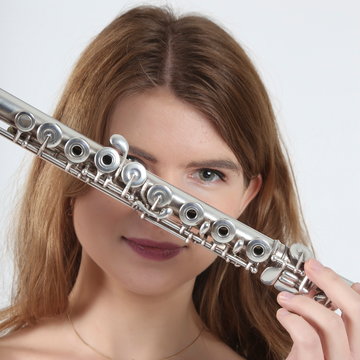 Check availability and get a free quote now - no commitment to book
From£180
Watch & Listen
About Tatiana
Home page
Tatiana Righini
Like Tatiana?
Watch & Listen
1 of 1 video

Tatiana was born in Belarus in 1993 and she’s been living in Rimini (Italy) since 2002. She began her flute studies at Rimini’s Music Academy where she immediately achieved a scholarship as the Academy’s best student. She was then admitted to the Rossini Conservatory in Pesaro where she graduated in 2012 two years early with honours under the guidance of Albino Mattei; she was regularly selected to play as a soloist with the Conservatory Orchestra at the yearly concerts. She attended a Flute master course in Florence with Tuscany’s Orchestra Principal Flute Michele Marasco. She attended the International Academy of Imola under the guidance of Andrea Oliva, Principal of the Orchestra dell’Accademia di Santa Cecilia. Tatiana won various national and international flute competitions across Italy. More recently, she won the Luigi Zanuccoli International Competition in Rimini and the Academia Praeneste Competition for young musicians in Rome. She is currently studying at the Guildhall School of Music and Drama for a Master Course in Orchestral Artistry. The School has awarded her a two-year bursary, and she is also the 2015 recipient of the prestigious John Hoisier Music Trust Award. Tatiana recently played a flute and piano duo recital at the Italian Cultural Institute of London. She performed and recorded the contemporary piece "Zilver" by L. Andriessen at the Barbican, which was broadcast on BBC Radio 3. She was involved in a project with Leipzig Gewandhaus Orchestra. She regularly performs around London venues including the Barbican with the Guildhall Symphony Orchestra under the baton of prestigious conductors such as James Blair, Takuo Yuasa, Michail Jurowski, and with various chamber music groups. She recently performed in a concert in collaboration with London Symphony Orchestra conducted by Sir Simon Rattle.