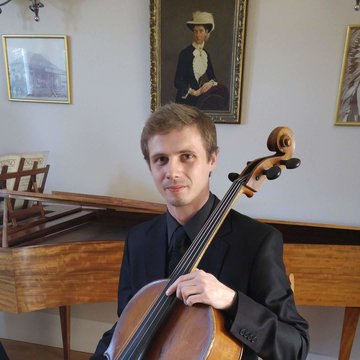 Szymon's musical journey began at the age of 7, when he started to play piano. His passion drove him to expand his musical experiences and so, at the age of 8, he joined the Music School in Jastrzębie-Zdrój, where he began studying cello in the class of professor Adam Markwica (cello concertmaster in Silesian Opera in Bytom, Poland). In 2009, prepared by Pawel Glombik, Szymon gained a place at the prestigious Academy of Music in Katowice, Poland. His teacher was professor Marek Szopa (cellist in the National Symphonic Orchestra of Polish Radio), who drew the young cellist to the depth of the orchestral repertoire. In 2010 Szymon won a principal chair of the Academic Symphony Orchestra. During this period he was actively participating in various chamber ensembles as well. First teaching experience the cellist gained in the years 2011/2012, when he returned to his hometown , this time to assist his teacher, professor Adam Markwica at the Music School. Shortly afterwards, in 2012, Szymon obtained a Bachelor degree from the Academy of Music in Katowice. From February 2016 to April 2017, Szymon was a principal cellist of the Notting Hill Orchestra for Film Music. Also, from June 2017 he became a member of Trio ESPRESSIVO. Passionate about chamber music, he also performs with different ensembles abroad and around London. Recently, Szymon joined the teaching faculty in the West Kensington Music Team and London Music Centre, where he teaches cello and piano. Szymon's musical interests encompass many genres in addition to classical music, including classical rock, film music, jazz and ethnic music which resulted in him becoming a member of the MANASUNA.

Dear Szymon, Thank you very much for playing on our wedding ceremony. It was big pleasure to have you with us on this very special day.

Hi Szymon, I wanted to say big thank you for your quick answer. It would be really difficult to find anyone else with such a short notice. Your playing was beautiful and I will surely recommend you to my friends.