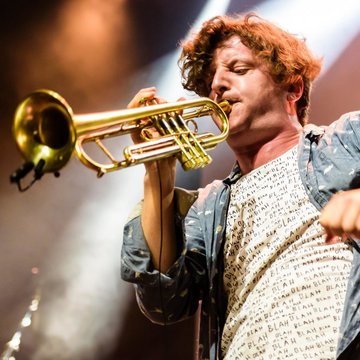 I play the trumpet. Also the flugel horn and things like that. I do it quite a lot, and people have been paying me to do so since 2006, and a bit before too, though nothing to write home about then to be honest. In addition to running and playing about 150 gigs a year with Hackney Colliery Band, as a freelance trumpet player I have played and recorded with lots of people. You want examples? OK, be like that: Kelis, Sam Smith (the singer one, not the excellent value UK pub chain), Paul Epworth (Adele), Damon Albarn, John Paul Jones (Led Zeppelin), Sophie Ellis Bextor, The Cure, Paloma Faith, Jamie Cullum, Baaba Maal, Roni Size, Jarvis Cocker, Billy Bragg, Charlotte Church, Azekel, Eliza Doolittle, Eric Idle, Redlight, Jim Bob (Carter USM) and more, quite a few of whom I have also arranged music for. I have played in pits for touring and West End shows, though that's not really my thing, and toured for a year with a musical about Elvis. I was young, and needed the money. And I learned a lot about Elvis. Trumpet with electronics These days I do a lot of work with electronics augmenting my sound. This side of things can be heard all over the 2016 Hackney Colliery Band album Sharpener which I co-produced, as well as our 2017 live album, and all of our live shows. You can also hear it on our Sky Arts Christmas Special from 2015, especially on my arrangement of In the Bleak Midwinter. Studio and sessions As well as producing records and music for TV and theatre in my home studio, I also record myself playing trumpet, flugel horn or other things. I have done this for lots of people over the years, and it works very well. I can generally turn around a recording very quickly (please check with me as it may take longer if I am touring a lot at the time), and deliver the files via Dropbox in low res MP3 for your approval, then tweak as appropriate and ultimately deliver in uncompressed WAV or the format of your choosing. Often people will want a specific part played, but then also a couple of takes of me trying out some improvised ideas over the whole track. This latter stuff often gets used a lot in the final product. I charge very reasonable rates, and have never had a client who wasn't satisfied, so if you would like me to add some tasty trumpet, flugel or trumpety electronics to your tracks, let me know. If you're a gear head, you should know that to record myself I tend to use a Coles 4038 ribbon mic into a Neve Portico II channel strip into Pro Tools 12, and if you want some room ambience, also a Townsend Labs Sphere modelling mic into a UAD Apollo normally running a Neve 1073 preamp emulation. I can, of course, come to your studio, as I have done for the likes of Sam Smith and Roni Size, but if you're on a budget, recording in my home studio works great. Education work I have been a trumpet and improvisation tutor for Goldsmith's College and Brunel University, and have also run education projects with The Roundhouse, Royal Opera House, Nottingham Trent University and Hackney Empire. I have recently started giving masterclasses in trumpet, and featuring some of my electronic work. I try to bring a new approach to masterclasses by emphasising practical advice pitched at the level of the students, and offering them an unusual perspective on being a contemporary instrumentalist, including tonal and electronic augmentation, concept and presentation alongside conventional masterclass areas like improvisation, ensemble playing, technique etc. At one masterclass in October 2017 at St Dunstan's College in London, a parent wrote: 'I just wanted to drop you a note to say how enjoyable the masterclass evening was tonight. Steve Pretty was fabulous with the students and it was wonderful to hear him play. Thank you for organising this evening, it was both a refreshing approach and inspirational.' If you would like me to run a masterclass at your school, college or university, please get in touch. In 2014 I was artist-in-residence at ACS Cobham International School. From 2012-2014 I ran a collaborative unauditioned band for the Oslo Mela Festival. I give private lessons from my home studio in Dalston, London, and can also give lessons via Skype. I like teaching but these days don't have a whole lot of time to do it, so regular lessons are a bit tricky, but if you don't mind them being infrequent or at irregular times, drop me a line using the buttons above.

Thanks for making the session a pleasure - great playing and recording!" - Ritch Spence

An ingenious blend of showmanship and intelligence