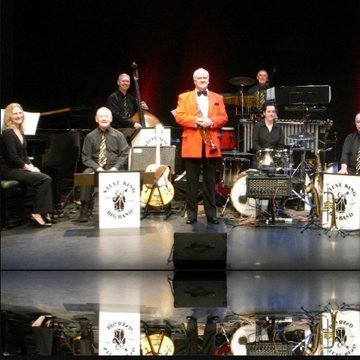 The band originally started as an offshoot of Steve’s school orchestra, and from these early beginnings as a youth band, the passage of time has, after forty years turned the Steve King Big Band into one of the Midlands leading exponents of big band music. The current line-up is an eclectic mix of seasoned pros and semi-pros including some of the brightest sparks in the jazz scene today which helps keep the band at the forefront of the burgeoning big band movement. The band has always known success. Since winning a talent competition in the early days, it has gone from strength to strength, appearing at every major venue in the West Midlands playing for concert and dance engagements including several sell out appearances at Ronnie Scott's. It was amongst the prize winners at the annual Musicians' Union Big Band Contest an unprecedented nine times, winning outright on two occasions. It has six bestselling albums currently in release including its latest CD, '60 NOT OUT”. The band can be heard regularly on various radio stations including The Bridge Radio 102.5FM and BBC Radio Hereford & Worcester. Part of the band's appeal is the wide range of musical styles it plays. A typical concert will encompass anything from Goodman to Goodwin. With a woodwind section that doubles twenty-six instruments between them and a tuba player and tuned percussionist as part of the regular line-up, this band tackles many charts other bands cannot reach! Vocals are in the very capable hands of Lynn Dawes who hails from the USA. Lynn has appeared on four of the band’s albums and has proved a big hit with audiences throughout the UK. In order to maintain its musical integrity, the band has twice been awarded lottery grants from the Arts Council of Great Britain which enables it to continue with its own brand of big band music without commercial considerations. However, the UK is not big enough to support a band just playing for concerts, and the band turns its hand to many things to keep working. They are one of the few bands to still carry a ballroom dancing library and also perform for forties nights with a full library to match alongside its demanding concert programme which features the best big band music of the last 60 years.

We can offer any lineup from a duo to full 19 piece band. Our most popular lineups are a 5 piece (Vocals, trumpet, keys, bass and drums), a 9 piece ( 2xsaxes, 2xbrass, keys, guitar, bass, drums and vocals) and the full band.

We can accommodate any timing changes. You pay for the time we are there, so, as long as the overall slot doesn't change... no problem!

Yes, DJ service via our PA is free if required during the gig. If after, it's £150.00 additional.

Minimum of 1 hour. With the full band we prefer 2 hours.

Our vocalist can roam with a radio mic.

PA and lighting system is included in your quote.

If a song isn't included in our song list there may still be a chance we already know it. If there is a special song you'd like us to learn we are happy to do this for you. There is a fee of £150 for this service to take into account rehearsal times etc.

Fabulous band, had many compliments. Had everyone on the floor all night

Everyone thought you were wonderful. Perfect for the occaision