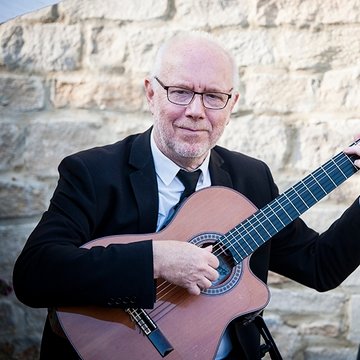 Steve has played the guitar for over 40 years and has a huge repertoire from Bach to Beatles. Solo or with a group. He doesn't sing!
3 of 5 photos
Guitarist
Cheltenham
Verified profile

Steve is a virtuoso guitarist who specialises in playing the Spanish guitar. He plays in all the styles associated with the instrument including pop, standards, jazz, Latin, flamenco rumba and classical. He is in his element with the pop and standards repertoire, having written many arrangements of popular tunes for both solo guitar and small group settings. His early career saw him performing on the electric guitar in showbands and backing cabaret artists with the occasional stint backing chart acts of the day. Steve now plays the Spanish guitar exclusively and uses it to create all types of music from Bach to Burt Bacharach! He plays sophisticated background music in restaurants, private parties and other events and specialises in playing for weddings - for the entrance of the Bride, during the signing of the marriage register and for the exit procession. Guests can then be entertained by the romantic backdrop of Spanish guitar music during the drinks reception or during the wedding breakfast. Steve has a huge repertoire of popular guitar pieces and is always happy to learn chosen favourites if necessary for performance during an event.

Steve played at our Wedding Breakfast. He played beautifully, and created a lovely atmosphere during the afternoon. Highly recommend Steve for any event. Thank You.

Steve did a great job at our Spanish-themed party!

Thanks so much for playing at our wedding. You managed to perfectly select the right pieces from your repertoire to compliment the tone of the day and the beautiful setting. So many people commented on how good you were and I shouldn't be surprised if you get a couple of bookings from it. Thanks again Steve for helping make our day so perfect.

Steve provided beautiful guitar music during the meal at our wedding in March. He was sat up on the mezzanine level and it provided the perfect background music over dinner, not too loud and so much nicer than an MP3 compilation mix playing! It was a subtle addition which many of our guests commented on and we would highly recommend - thanks Steve