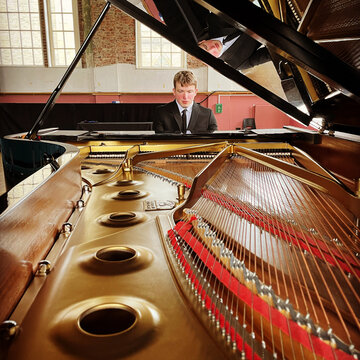 British-American Concert Pianist Stephen Gott (b.1991) has a growing reputation in the classical music world following his appearance on BBC News. After attending Leeds and Trinity Laban Conservatoires, Stephen currently studies privately with Pascal Nemirovski. He is also enrolled on the Master’s in Music Performance course at the University of Huddersfield and studies with the Head of Keyboard, Jonathan Fisher. Stephen has performed in various towns and cities across the UK including; Halifax, Huddersfield, Oxford and London. Also, he has performed in masterclasses and workshops with; Dr Leslie Howard, Stephen Hough and Paul Roberts. He was a finalist in the Liszt Society International Competition.

I usually set up about 1 to 1.5 hours before the performance time to warm up.

Yes, of course. As long as the piano is in working order and in tune, then I'm happy to play on it. This would be preferable to bringing my own keyboard.

Yes, although a Piano at the venue would be preferable.

If there is a special song you'd like me to learn I would be happy to do this for you given enough time.

Standard Prices
All prices include:Includes travel up to a 5-mile radius and preparation time. Paid break if longer than 1 hour.
NEW!Virtual services
Personalised Music Message
Book me to create a unique music video for you to send to a friend as a gift. This could be a birthday message, first dance song for a wedding anniversary, or just your friend's favourite song to cheer them up.
£15

We booked Stephen Gott Pianist for our wedding based on previous reviews and we were not disappointed at all. He arrived early with all of his equipment dressed professionally and he was very polite and friendly. We decided to book Stephen for the arrival of the guests at the reception and everyone really enjoyed the music. He is very versatile and played a range of music styles which we had asked for beforehand and also played some requests from the guests. I can't recommend him enough for any event he goes above and beyond.