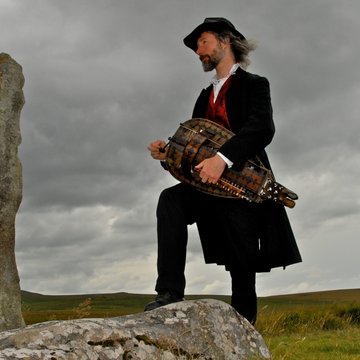 Steve co-founded medieval music band Misericordia with Anne Marie Summers in 1994, together winning the duet competition at St. Chartier festival 1999 in France, and joined Katy Marchant in Daughters of Elvin in 2001. He is well known for his inventive and rhythmic playing of the hurdy gurdy and has performed with such diverse artistes as English folk singer Jackie Oates, German industrial/electronic musician F.M.Einheit and South African puppeteer John Roberts; also performed or recorded with singer/harpist Hattie Webb, folk singer Jim Causley, Jon Swayne and Becky Price, The Wendigo, Angles and folk singer/guitarist Andy Clarke. He has played for theatrical productions at Shakespeare’s Globe, most recently for John Milton’s Comus in 2016 and The Secret Theatre in 2017, both in the candlelit Sam Wanamaker Playhouse. He is currently working on dark multitrack music mixing hurdy gurdies with dulcimer, reed organ and diverse instruments, inspired by patterns in nature, mathematics and the imagination.

Steve Tyler is blessed with virtuosic technique and imagination. He is amongst the best hurdy gurdy players on the European scene.

Many thanks to you for a fabulous set of tunes for dancing on Saturday night...you sounded great