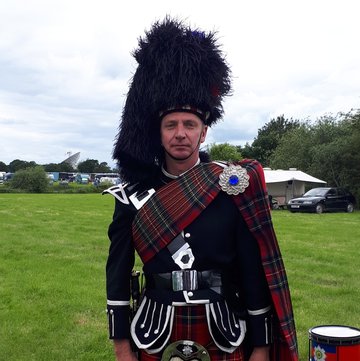 I began learning the bagpipes at the age of twelve. He was taught at the Scots Guards Association in Manchester by Bob Lyle who was Pipe Major of the band for a number of years. I played with the band for two years and then moved on to form the Wythenshawe Pipe Band with a number of other players. This was the first time he had played in competitions with a band and as a solo piper. I then moved on and joined The Phoenix Pipe Band in which he played with for twenty years, in which time the band went from grade 4 up into grade 2 also competing in grade 1 (highest grade). I then joined the Greater Manchester Fire and Rescue Pipe Band as Pipe Sergeant. In 2006 I rejoined the Manchester Phoenix Pipe Band who are now a Grade 3b pipe band. I have been Pipe Sergeant of the band. I regularly play in solo piping contests and have won a number of trophies. I can be available to play in most areas of the north west of England, I've played at hundreds of weddings, funerals, parties, Burns nights, New Year’s Eve event, plus many other functions including television and radio.

The Dark Island
Amazing Grace
Highland Cathedral
Going home
The mist covered mountains
The Flower of Scotland
The Skye Boat Song
My home
The green hills of Tyrol
When the battle is over
Mull of Kintyre
The Highlands wedding
The Battle of the Somme
The Heights of dargai
The flowers of the forest
Scotland the Brave
Marie's wedding
Brown haired Maiden
The black bear
Cock of the North
Mrs Lily Christie
A man's a man for a that
Farewell to the creeks
The mucking of geordie's Byre
plus many other Strathspeys reels jigs and hornpipes.
Customer questions

Not a problem, I'm very flexible.

I will be set up before I arrived

I always play to a very high standard.

I have played for TV radio and Rod Stewart concert

Steve has played for us on 2 Burns night suppers, and played his pipes very professionally. He is highly recommended.

Steve has played for my agency Wizardry Entertainments for a number of years and he's highly recommended, and very professional in what he does.

Steve has played for us for the last 2 years on our British Boys and Girl scout groups Annual Commissioning Church Service Parade. He is very well turned out in uniform, and is an excellent Piper. He is also very easy to contact and quick to reply to any messages . Highly recommended. Lee Wilson (SKIP) Group Scout Master 1st Llandudno Junction BBS / BGS Scout Group