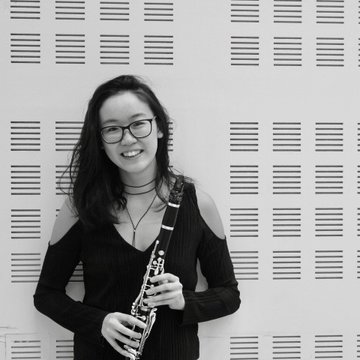 Freelance Clarinettist based in the UK.
3 of 10 photos
Clarinettist
London
Public liability insurance of £10 million

Stephanie Yim began her musical studies at Chetham’s School of Music before being awarded a scholarship in 2013 to study at the Royal Northern College of Music. Stephanie has also completed an Erasmus semester at the Kunst Universität in Graz, Austria and a year of study at the Hochschule für Musik und Darstellende Kunst Frankfurt. In July 2020, she graduated from the Guildhall School of Music Orchestral Artistry Programme with an MMus with distinction. Stephanie was generously supported by a Guildhall entrance scholarship, Countess of Munster Trust and Help Musicians UK as an Ian Fleming Award Holder. Stephanie has participated several high profile masterclasses with Martin Fröst, Andreas Ottensamer (Berlin Philharmonic), David Howard (LA Philharmonic), Michael Collins and the Berlin Philharmonic Wind Quintet. Stephanie has been featured on BBC Radio 3, BBC Proms with the National Youth Orchestra GB and RNCM and has played under the baton of notable conductors such as Vasily Petrenko, Sir Mark Elder, Michael Tilson Thomas, Sir Simon Rattle and Gianandrea Noseda. In 2015 she was also chosen to participate in the Penderecki Academy in Poland after working with Penderecki on the UK Premiere of his 7th Symphony at the RNCM. In 2017, Stephanie toured as an academy member of the Chamber Orchestra of Europe to Baden-Baden, Germany and the BBC Proms and as Principal Clarinet of the RNCM Symphony Orchestra at the 42nd Cantiere Internazionale D’arte, Montepulciano. She was also invited to the Järvi Academy/Pärnu Music Festival working with the Estonian Festival Orchestra. Most recently, she has performed professionally with the Ulster Orchestra and the BBC Philharmonic as part of live concert broadcasts on Radio 3 and rehearsed with the London Symphony Orchestra. She is also performing with the Chipping Campden Festival Orchestra in September 2021. Stephanie is currently principal Eb Clarinet in the Young Musicians Symphony Orchestra and is on the extra player lists for the Hallé Orchestra and BBC Philharmonic.

Independent review of a performance of Mozart Clarinet Concerto in Oldham 2018. "Then came Mozart’s Clarinet Concerto, an iconic work of epitomical greatness. The soloist was Stephanie Yim, who began her studies at Chetham’s School of Music in 2006, graduated from the Royal Northern College of Music and is already pursuing a career that could surely take her to international heights. Her understanding of the music, which overflows with Mozart’s love for the instrument, was clear for all to hear as she demonstrated the technical finesse required to present a polished performance. This is music which is heard repeatedly over the airwaves in digitally enhanced recordings by the most glamorised performers. It was a real delight to be able to experience a live performance by an aspiring artiste whose communicative artistic and communicative skills, along with the accompanying orchestra’s encouragement, made it such a refreshing and enjoyable occasion."

"Many individual players – especially the first clarinet (Stephanie Yim), who is already in the highest class – achieved distinction."