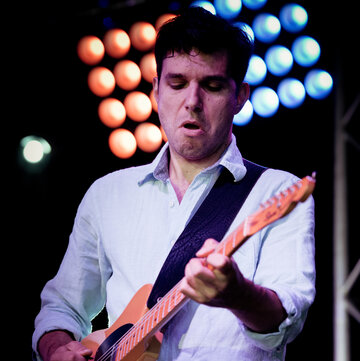 ABOUT Professional Guitarist, Oud Player and Composer based in London. Born in Larisa, Greece, he has been playing music from the age of 10. He took his first lessons on the greek Lute by Yiorgos Deligiannis. Later he studied the Oud with Kuriakos Kalaitzides and guitar with Kostas Maginas in Thessaloniki. At the age of 17 he started performing professionally as a Guitarist and Oud player in local clubs, theatres and festivals across Greece. In 2005 he moved to London and studied at The London Guitar Institute/ Guitar X. He was taught and inspired by great guitarists such as Shaun Baxter, Mike Outram and John Wheatcroft, and was awarded the prestigious title of ‘Best Guitarist of the Year’ in 2008. During this time Stefanos performed as a guitarist with Andy Thunderclap Newman, and collaborated with London based musicians such as Rom D Collective, Andrew Mckinney, Vasilis Xenopoulos and Duncan Eagles among others. He also lead the world music group Anosis and his own Jazz Fusion Trio. As a Blues guitarist, Stefanos has performed with Joshua Blue, Sam Kelly, Alix Antony and Robin Bibi, and he also played Jazz Funk as a member of The Groove Warriors with Dave Clayton and Vic Bynoe. He has also performed and recorded on Oud for Noraay Means Light, the Iota Group and currently Melange Collective. Stefanos is well known for his versatility and ability to move across styles and genres on both the Guitar and Oud, and his musical style incorporates Blues, Rock, Jazz and Mediterranean sounds. His main influences are: Jim Hendrix, SRV, John McLaughlin, Pat Metheny, Jeff Beck, Wes Montgomery and many more. At present, Stefanos is part of three exciting projects: Acoustic trio with bassist Dave Jones and drummer Eric Ford Modern Jazz trio with bassist Kevin Glasgow and drummer Emiliano Caroselli Guitar Duo with guitarist Benjamin Gasiglia Katz In 2017 he is about to release his first album, “Native Speaker”with Dave Jones on bass and Eric Ford on drums. He frequently performs with fine musicians such as Maurizio Minardi, Demi Garcia Sabat, Shirley Smart and Peter Michaels at venues such as: Barbican free stage, Pizza Express Soho, The Vortex, Wiltons Theatre, 100 Club, The Bulls Head (Barnes) and Half Moon (Putney). In 2016 Melange released their album ‘Via Maris’ and they performed live on World on 3 Sessions on BBC Radio 3.

We hired the band for a wedding celebration in our garden. Jose made the booking process very easy and he was very careful to make sure we had the right kind of mix of instruments and singer to suit us. He sent a long and varied list of song choices. Requests were also encouraged. On the day the band were professional in every way from setting up to performing a whole beautiful range of songs. There was something to suit everyone. We loved Lee Gold’s voice (and amazing keyboard skills - how I would love to be able to do that!). Harrison Cole’s jazz trumpet was smooth and cool all through, not forgetting the great bass Kevin Glasgow and the fabulous rhythm house that is Jose Sacristan. This band had just the right mix for us of jazzy, cool music while our guests wanted to eat and talk, but could turn up the volume and liven up the beat at just the right time for some dancing. Plus the band were such lovely guys - friendly and warm and had a great rapport with our guests. We have had great feedback from our guests about how great the band were. I can thoroughly recommend booking this band. Amanda Parker

Some words from London Jazz News’ review of the Stefanos Tsourelis Trio’s live performance at Bull’s Head, Barnes Feb 11th 2017: Simple chords suddenly awoken by incredibly fast runs in unison with the bass- one of the amazing variety of timbres in the trio ….. One of Tsourelis’ heroes is John McLaughlin (and his 80s/90s trios with Trilok Gurtu) and you could hear a strong influence. ..... Eric Ford’s sensitive cymbal work was complex, tiny beats scattered between the strokes of the cowbell, often following the rhythm of the melodies... the full drum sound allowed guitar and bass to play in unison without the sense of anything missing …. There were time signatures to keep you on the edge of your seat throughout the gig, here 6/8, then 7/8 - Tsourelis studied Greek lute, and its rhythms, in Greece before being introduced to the oud by his teacher…. There was a wonderful sense of the trio grooving together very intuitively ….. The gorgeous chord melody head and Metheny-esque solo lulled us, the repeated phrases recurring like waves….. Moody and minor, with fast, rising, almost flamenco riffs caught in the net of the spacey chords ….. Spancil Hill, an Irish tune, was the only one not written by Tsourelis, and the sweet melody nestled among oriental trills. Dave Jones’ solo was beautifully melodic as well as percussive …..

Ouds in the UK
Ouds in St Albans
Ouds in Slough
Ouds in Windsor
Ouds in Sevenoaks
Ouds in Hertfordshire
Company
Discover
Download
Join us on
© Encore Technologies, Ltd.
Crafted with bagels and in London