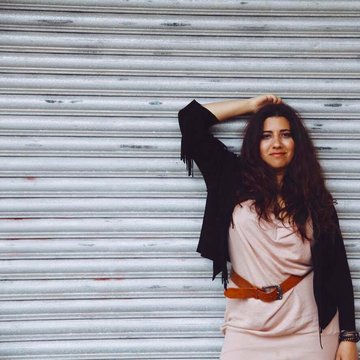 Stefania is a session vocalist and vocal/piano tutor living and working in London.
3 of 11 photos
Singer
London
Public liability insurance of £1 million

Stefania is a highly versatile session singer, vocal coach and choir director currently living and working in London. She has a wealth of experience in live performance, both as a lead and backing vocalist, as well as choir singer and choir director. The last five years have seen her working with artists such as Lukas Graham, Alexandra Burke, Basement Jaxx, LA based hip hop artist Ill Camille, SEL Soul (SoulIISoul, Alicia Keys), MOBO Award winning rnb group Big Brovaz, Anna Dellaria (Chaka Khan, John Fogerty), British artist Clare Maguire, jazz artist Tricia Tahara (Lenny White, Alphonso Johnson) and many more. She has recorded vocals for many artists and bands and has made several TV appearances, including providing backing vocals for several tv shows, such as XFactor, The Michael McIntyre Big Show, All Together Now and appearing on Sky 1's recent show 'Sing:Ultimate Acappella' and BBC's Songs of Praise. Stefania has worked with some of the top choirs and ensembles in the UK, including IDMC Gospel Choir, Karen Gibson and the Kingdom Choir, CK Gospel Choir, Juliet Russell’s Assemble, London Contemporary Voices , The West End Gospel Choir and Enchorus. She has performed in venues such as Wembley Arena, Barbican Centre, Glasgow Royal Concert Hall, the Union Chapel, KOKO, Hideaway Jazz Club, Heaven Nightclub, Indigo at the 02, Hackney Empire and the London Palladium. She also sings with function bands and duos and coaches singers of all ages and abilities.

Stefania sang in the chorus for Hashtag Opera's concert performance of Donizetti's Anna Bolena and did a very good job. We would be happy to work with her again.

As a singer, Stefania did everything from singing lead to background vocals, as well as arranging background vocals in a variety of situations. I placed her as a Music Director in my Paros, Greece classes for the Aegean Cultural Initiative in 2015. She excelled and thrived in this role, and was an inspiration to her many students!

A Big Special Thank You To Our Lovely ProVoc Gospel Choir for making our day that extra special, we were blessed by their presence & touched by their voices.

Stefania's charisma and vocal gift made the event truly special and lovely experience for everyone involved-the birthday surprise was a great success. I gladly recommend Stefania as a very helpful and reliable person, who takes her job very personally and, most of all, as a great singer.'

Thank you so much Stefania and Marko, you managed to enthrall and captivate both children and adults alike with the quality of your musicianship and approachable style. The parents were most impressed with how you managed to engage them with participating musical activities. You definitely helped to make our company’s summer party that more memorable. We have no hesitation in enlisting your services for future events. Kindest regards, Harry Sham, Facilities and Events Associate, Open Society Foundation London”