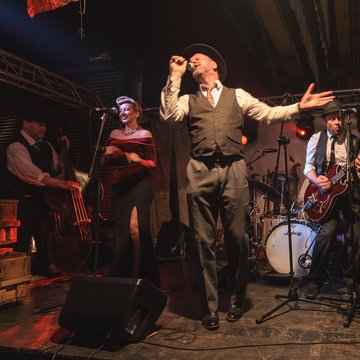 7 piece Swing Band began back in 2017. After meeting at music events, the enthusiastic, like minded, professional musicians put together the band -St Louis Express. Full of energy, great entertainment and fun, playing sounds from the Golden era of music 1920’s to early 1960’s. They have developed their sound to suit all ages from 1 to 92 playing at various live music venues. Songs from legends, Frank Sinatra, Ray Charles, Louis Prima, Dean Martin. Louis Jordan. Harry Belafonte. Playing Jazz, Swing standards that most people will recognise. A totally live line up of saxophonist, clarinet, flute player, double bass, drums, guitar, lead and backing vocals, harmonica. Top quality professional musicians ! Some of the band have performed at the Albert Hall regularly at music festivals including Proms season. Resident band for the Peaky Blinder events at Cardiff Depot (on video) & Motion Bristo, playing to sell out nights, attracting over 6,000 peoplel. Regularly performing at Vintage festivals, Weddings, Corporate & special events. The band dress in 1930's 40's attire. To take audiences back in time to a Swing /Jazz era. Engaging with audiences with infectious uptempo feel good music. So if your looking for a memorable night of entertainment, something a bit different to your regular pop covers band. Please get in touch. We would always recommend that customers see a band live before booking. Something we can arrange through Encore. Almost all of our bookings through Encore have come from customers who have seen the band play live. The band have a great following in South Wales.

Night Train - Louis Prima
Lady is a tramp- Frank Sinatra
Don't mean a thing ain't got Swing.- Louis Amstrong
King of Swingers- Louis Prima
In the Mood- Glen Miller
New York New York- Frank Sinatra
Be my Guest- Fats Domino
Mack the Knife- Bob y Darren
Jump in line, Shake senora
Let the good times roll
Ain't nobody her but chickens
Route 66
Putting on the Ritz
Charleston
Hey Boy Hey Girl
Tequila
All of me
Hallelujah I love her so
Minnie the Moocher
Flip Flop Fly
5 months 2 weeks 2 days
Sway
Fly me to the Moon
Caldonia
Choo Choo Cha Boogie
Cry to me
Pennies from heaven
I've got a woman
Hit the road Jack
Buena Sera
King of the Road
Jump Jive Wail
Got you Under my Skin
Delilah
Stranger on the shore
Let's stick together
Never fall in love again
Just a Gigolo
The Chicken & Hawk
That's Amore
When your smiling
Oh Marie
Lavender Coffin
Let it Snow
Rockin around the Christmas tree
Jingle bell Rock
The Christmas song
Delilah
You are my Sunshine
Smile
Things
I cant stop loving you
Don’t fence me in
You make me feel so young
Whistle stop
Putting on the Ritz
Ain’t miss behaving
Let there be love
L-O-V-E
That's Life
Don't get around much anymore
Perhaps
Smile
When your Smiling.
Save the last dance
Bye Bye Blackbird
Green Green Grass of home
Father & Son
Dayo.
Theme from Godfather
Customer questions

Yes, Mark our lead singer is band leader too.

Yes, we usually perform as a 6/7 piece band. With line up of Drums, Double bass, Guitar, Saxophone / Clarinet, Harmonica, vocal lead & 2 backing vocalists. We can add trumpet & trombone for 9 piece ( See Winter Gardens video) we can perform as a 5 piece too

Please contact us ASAP to see if we are available on rescheduled date.

Yes, we can play music between sets through our PA system. If you want DJ service via our PA after the final set until the venue closes, we provide this for an additional fee agreed.

We take at least 1 hour. We can play background music around 30 mins after start of set up. Would always prefer to allow 1.5 mins to 2 hours for set up sound check. And little chill before performance.

Our set lists are crafted from countless performances and knowing what songs works best to ensure guests dance and have an amazing time. However, we're always happy to discuss any special requests. Making sure we find what works for your event. ”

Yes, PA & our lighting is included in quote. Although for venues of over 300 people, larger hire PA's may be required.

If a song isn't included in our song list there may still be a chance we already know it. I Or if a requested song fits our genre of music 1920’s to 1960’s we may be Happy to learn for future events There is a fee is song is a one off for event of £40 for this service to take into account rehearsal times etc. ”
St Louis Express

Thanks Debbie, Was a great night! Fab that everyone dressed up for the occasion.

We booked St Louis Express for our wedding in July 2021, after having seen them play locally, and were thrilled with their performance. I chatted to Mark quite a bit before the day - he was always quick to respond to phone calls and emails, which was especially helpful during lockdown as government guidance was changing. As well as providing reassurance, he taught me a lot about their style of music (listen to Louis Prima!) and was very flexible in adapting to our requirements. The band went out of their way to give their set a Latin swing (my husband is from South America) and we chose a first song that suited us perfectly. On the day, the band was fabulous as we knew they would be. They were totally professional and their set-up was unobtrusive. Everyone loved their music, which just makes you feel "you just have to dance!" They were lots of fun to be around, and one couple loved them so much that they even booked them for their wedding as well! Highly recommended - you will not be disappointed.

Hi Caroline, Hope your both doing well. Thanks for a great review & a great night.

Best band I have seen for a long time, amazing night at the peaky Blinders event !!!