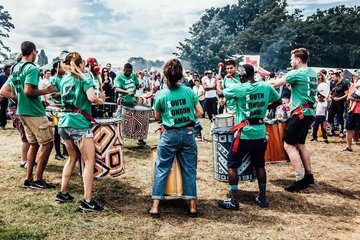 South London Samba is a collective of energetic carnival drummers who blend world rhythms with their fresh South London vibe. They are heavily influenced by the rhythmic culture from South America, the Caribbean and Africa. Adam Ouissellat (Band Leader) formed the band in 2013 with friends from school, after buying some used drums on Ebay. They first began rehearsing in Peckham Rye Park on weekend afternoons and started getting gigs in the local area. Since 2014 SLS have been rehearsing and running weekly classes at The Midi Music Company in Deptford. South London Samba has performed as part of the 2019 Cricket World Cup Opening Ceremony, with the Black Eyed Peas (UEFA Champions League Final 2017), O2 Arena, Lovebox, Love Supreme, Elrow Town, We Out Here, X The Tracks and many more.

All prices include:Up to 30mins per set (45mins for parades). 10-20min sets are recommended to give maximum impact.
Packages
5 Drummers + 2 Street Acrobats7 musicians
For a more interactive performance we can bring 2 (or more) of our amazing street acrobats. They move in and out of the audience, doing stunts and flips. They bring people into the middle for a dance, or line them up and do daredevil flips over them! We can perform for up to 2 x 25mins, or 1 x 40min parade
£1250

Pleasure to work with them and the delegates loved the surprise!

Excellent band. Perfect for our event and easy to work with. Would hire them again in a heartbeat.

Charlotte, A, 4 years ago

Dear Adam and the rest of the South London Samba Team! I just wanted to say a big thank you for adding such a special and engaging element to our Community Funday here in Feltham yesterday. The whole day was so wonderful and the weather was actually on our side for a change!

Dear Adam, Thank you for attending the event last night, everyone really enjoyed the performance.

Just wanted to say a huge thanks to both the guys from the Samba Band, and Fuse. Fuse opened the show brilliantly, and the Samba Band really got the guests ready for an evening of celebrating! Both were enjoyed by everyone and feedback has been great – we hope they enjoyed the event as all the guests clearly did!

Samba bands in the UK