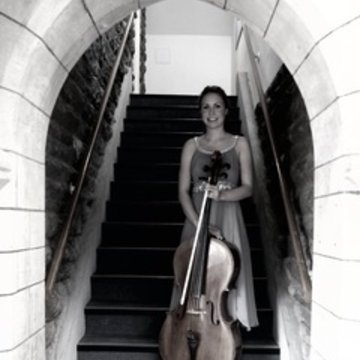 Sophie is a young and enthusiastic cellist based in Cardiff, London and Manchester .
3 of 3 photos
Cellist
London
Public liability insurance of £10 million
Verified profile

Sophie, originally from Cardiff, began learning the cello at the age of 8. By the age of 17 she had progressed through all of the local youth orchestras and gained a place in the National Youth Orchestra of Wales. In 2014, her final year, she was principal cello, under the direction of Jac Van Steen. Sophie studied at the RWCMD under the tuition of Rosie Biss. During her time there, she was a keen chamber musician and a member of the Scott Quartet. In April 2014, the quartet won the first annual Bridgewood & Neitzert String Quartet prize at RWCMD and were awarded scholarships to study at the Wintergreen Academy, Virginia, USA in summer 2014. They were also put forward for the prestigious Cavatina Intercollegiate String Quartet Prize 2014 in London and have given a wealth of performances around Cardiff and beyond. Since graduating in 2015, Sophie is performing across Wales and England with various ensembles, including British Sinfonietta, Sinfonia Cymru, Welsh Sinfonia London Opera Productions, Novello Orchestra and acting as principal cello for the Young Musicians Symphony Orchestra.

JB
Jessica B
5 years ago

Can't thank Sophie enough the music was beautiful and she went with the flow when we moved . Lovely lady with such talent Thankyou x

Sophie joined us at our home in North London and played some jazz for our guests as they arrived. My brother and I had arranged a surprise 50th for my mother and Sophie was part of the big surprise. All our guests and my family thoroughly enjoyed her music and Sophie was an absolute pleasure! Should I ever require live music I shall definitely contact Sophie again!