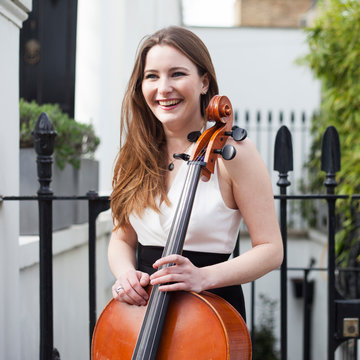 Sophie is a London based cellist available for solo, chamber, orchestral and session work.
3 of 6 photos
Cellist
London
Public liability insurance of £10 million

Sophie English is a London based cellist. She pursued a classical training at Trinity Laban Conservatoire of Music and Dance and has since gone on to play with artists including Sam Smith, Jess Glynne and Jessie J. Sophie’s work is shared between orchestral, pop and contemporary projects which have culminated in sessions and live performances at Abbey Road and on the West End. Her performance career has taken her as far afield as Europe, Asia, South America, USA and Australia playing with bands, orchestras and chamber ensembles. Sophie has worked alongside brands including Nokia, HTC, Virgin Media, STA Travel and Squarespace. These projects have found coverage on the BBC, Wake Up TV and The Huffington Post. Current projects include arranging the string section for the latest New Street Adventure album which is due for release on Acid Jazz Records in July 2016 and working with Grammy & Golden Globe nominated songwriter Scott McFarnon.

Thank you so much for playing at our wedding. It sounded absolutely beautiful and we had so many compliments about you.

What a treat! I have always loved the cello and you delivered in full. Thank you for making our party so special.