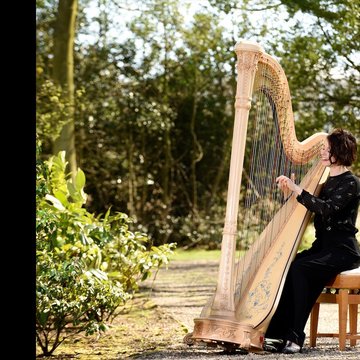 Sophie is an experienced professional harpist and harp teacher based near Edinburgh.
3 of 16 photos
Harpist
Dalkeith
Public liability insurance of £10 million
Verified profile

Sophie is a highly experienced and respected professional harpist. She holds a B.A. in Music, M.Mus. in Harp Performance and a P.G.D.E. in Music. Based in Eskbank just outside Edinburgh, she performs in the most prestigious venues in Scotland including Archerfield Estate, Cameron House Hotel, Dundas Castle, Edinburgh Castle, Glamis, Glenapp Castle, Gleneagles Hotel, Hopetoun House, Stirling Castle, Glamis, Marr Hall, National Gallery of Scotland, One Devonshire, Prestonfield House, Scone Palace and Skibo Castle. Sophie has performed for live broadcasts on BBC Scotland television and radio and STV. Alongside her concert work, Sophie performs for private and corporate events from formal functions to marriage proposals, weddings, civil partnership ceremonies and birthday parties. Sophie tailors her music to suit the occasion and client from an extensive and ever expanding repertoire to create just the right atmosphere for each unique occasion and is always happy to arrange music for your event and her harp playing has been enjoyed by members of the British and Norwegian Royal families, politicians and Heads of State and celebrities. Sophie combines her passions in busy performing and teaching careers. As an orchestral player she plays with orchestras across Scotland; as a recitalist, she performs as a soloist and in various ensembles and duos including Cuerdas with cellist Lindsey Martindale, with soprano Simone Sahyouni and flautist Sue Evans. Sophie has appeared as a guest recitalist and teacher at the Edinburgh Harp Festival, performed concertos with many orchestras including the B.B.C. Scottish Symphony Orchestra and regularly premiers works most recently Steve Davismoon’s work Driven Voids (for Harp, Voice, Violin and Electronics), a space specific piece for the Glasgow School of Art Reid Building and is a member of the Glasgow Glam Rock Dialogues.

Sophie was a pleasure to work with, with a very high level of artistry. I would recommend without reservation.

Verified
Gillian B, 1 year ago

Sophie was amazing I would highly recommend her.

You were super as always- thank you so much

I just wanted to thank you so very much for playing the harp at our wedding in St Giles. It was absolutely beautiful and I also had so much lovely feedback from guests of how beautiful they thought it was too. Thank you so much, I really appreciate you taking the time to make our day even more special.

The evening belonged to the Chamber Choir whose performance of Britten’s Ceremony of Carols was excellent, aided and abetted by the superb harp of Sophie Askew

Thank you so much for your work on the day, you looked beautiful and from what little i remember and the music was beautiful too. Thank you for carrying on and for your professionalism on the day.