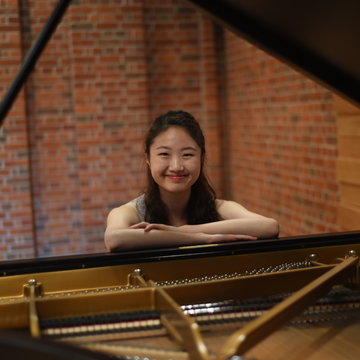 Check availability and get a free quote now - no commitment to book
From£180
Listen
About Songeun
Home page
Songeun Choi
Like Songeun?
Watch & Listen
1 track

Songeun was born in 1997 in Seoul, South Korea and is currently an undergraduate (BMus4) at the Royal Academy of Music.
Pianist
London

Songeun began learning the piano at the age of four and started the violin at the age of six. She studied with Graham Caskie in 2006 and became a pupil at The Purcell School in September 2007 where she held a scholarship funded by the Government’s Music and Dance Scheme. She studied piano with Carole Presland until 2010, continuing with William Fong, who she currently studies under at the Royal Academy of Music, where she is supported by a scholarship. Songeun has taken part in masterclasses and has attended summer courses including Cadenza, Chetham’s International Summer Music Course and the Dartington Music Festival working with Helen Krizos, John Thwaites, Philippe Cassard, Martino Tirimo, Christian Blackshaw, Dmitri Alexeev, Natalia Trull and John Reid. She has played in many concerts including Chopin concert at The Arts Club, London, Steinway Hall, Fazioli Concert Hall in Italy, a recital at Emmanuel URC in Cambridge, Klassische Klavier Kultur Festival in Weiz - Austria, Milton Court - Barbican, the Venue in Leeds, Wigmore Hall and King’s Place. Songeun has also been awarded 3rd prize at the 2015 EPTA Composers Competition. Songeun is also an enthusiastic chamber musician and is a part of the Odora Trio formed in 2017. They have received coaching from professors including Andrew West, Jo Cole, Melissa Phelps and Adrian Brendel. In May 2017, they were commended at the Isaacs and Pirani Prize at RAM. The trio were selected to take part in the Wye Valley Chamber Music Summer Residency in 2018.