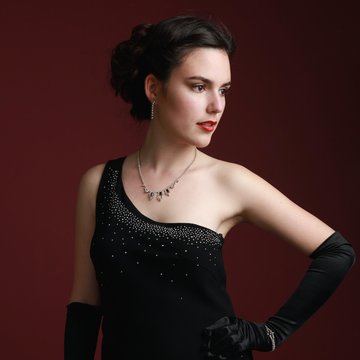 Sofia is a student at Oxford looking for musical opportunities around the area – specializes in lyrical singing, but also plays/sings jazz.
Singer (soprano)
Oxford
Verified profile

Sofia is a soprano and a music student at St John's College where she is a member of the chapel choir. She recently joined the Oxford-based choir Schola Cantorum and is also being coached in lyrical singing at the Royal Academy of Music by Glenville Hargreaves. The first ten years of her life were spent in countries such as Venezuela (where she was born), Azerbaijan and the UK, before her family moved to Dordogne, France. She started her musical studies in England through violin when she was 6 which she continued until she was 16 in institutions such as Fundación Mozarteum of El Sistema in Venezuela and then the Municipal Conservatoire in France. Nevertheless, it was her love for piano when she was 8 that pushed her more strongly towards further musical studies in the Périgueux Conservatoire with Marie-Frédérique Couzinet with whom she participated in masterclasses with Anne Queffélec and Philipp Cassard. When she was 16 she discovered her passion for lyrical singing with her teacher Julia Brian after many years of appearances as a singer-songwriter in various festivals and events around the southern part of France. She then received coaching from the Director of the National Opera Studios in London, Kathryn Harries, who, like Julia, continues to guide her towards perfecting her vocal technique. She wishes to continue in future towards opera studies – her first operatic roles were in 2016's Oxford-based productions of 'Patience' (as Patience), 'Fairy Queen' (as Juno) and recently 'Albert Herring' (as Cissie Woodgers). She was also a member of the chorus in the Student Production of The Marriage of Figaro (February 2017). She has performed as a soloist in a variety of situations, including solo recitals.

I booked Sofia for an event along with another singer, Sofia was amazing in helping with all the arrangements and liasing with the other artist, she was warm and friendly and her performance was outstanding, her voice was amazing and she is beautiful as well! I highly recommend. Thank you so much Sofia, I am so grateful, Helen x