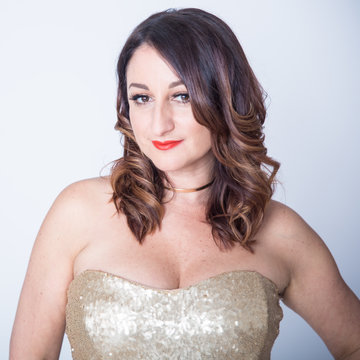 Simone Kaye is a soulful solo singer who sings with backing tracks singing songs from the 50s right up to the current day.
3 of 10 photos
Singer
Radlett
Public liability insurance of £10 million

Simone Kaye is a solo singer who sings with backing tracks and is suitable for any event from background music to upbeat party music. Performing as the "Olympic Performer" on BBC1's I Can See Your Voice and she was also a TV judge on BBC1's "All Together Now". She has performed at the 2012 London Olympics watched by over a billion people worldwide as well as singing for royalty. She has performed with many well known artists such as Ariana Grande, Joss Stone and The Brand New Heavies. Simone is regularly featured as a singer on TV shows such as This Morning, Sunday Brunch and various other prime time TV shows. She studied vocals at the prestigious ICMP in London and gained a distinction and has gone on to perform at many events all over the world. Simone will leave your guests mesmerised with her soulful voice and easy demeanour as well as deal with all your requirements with minimal fuss so that you can enjoy the day.

Soul:
Aint No Sunshine
Aint Nobody
For Once in my Life
Golden
Heard it Through the Grapevine
Higher and Higher
I Cant Help It
Isnt She Lovely
Just The Two of us
Lets Get it on
Lets Stay Together
Lovely Day
Never Too Much
Respect
Sexual Healing
Somebody Else’s Guy
Son of Preacher Man
Stand By Me
Streetlife
Sweet Love
Teardrops
Think
Thinking of You
Turn Your Love Around
Whats Going On
Natural woman
Until you come back to me
Jazz:
At Last
Crazy
Dream a little dream
Don’t Know Why
Feel Like Making Love
Feeling Good
My Baby Just Cares For Me
Old Devil Called Love
L-O-V-E
Summertime
Georgia On My Mind
What a Difference A Day Makes
Wonderful World
60’s & 70’s:
Aint No Mountain High Enough
Blame it on the Boogie
Carwash
Dancing Queen
Disco Inferno
Good Times
Human Nature
I Feel Good
I Will Survive
I Wish
Lady Marmalade
Le Freak
Living for the City
Mamma Mia
Master Blaster
My Guy
Play That Funky Music
Proud Mary
Rock With You
Shout
Signed Sealed Delivered
Sir Duke
Superstition
Thinking of You
Waterloo
Wish I Didn’t Miss You
Young Hearts, Run Free
You’ve got a friend
How Come you don’t call me
Pop:
9-5
All Night Long
Beat it
Billie Jean
Dreams
Faith
Finally
Flowers
Im So Excited
Kiss
Man in the Mirror
Mercy
Million Dollar Bill
Next to Me
Modern:
All About That Bass
American Boy
Be The One
Black & Gold
Canned Heat
Cosmic Girl
Crazy In Love
Crazy
Dance With me Tonight
Diamonds
Forget You
Get Lucky
Girl Put Your Records On
Happy
Havana
How Deep Is Your Love
I Cant Feel My Face
Im Yours
Just the Way You Are
Lean On
Let It Go (James Bay)
Locked out of Heaven
Love Is a Losing Game
Love Yourself
Magic
Marry You
Mercy
Moves Like Jaggar
Next To Me
No Scrubs
Price Tag
Rather Be
Rehab
Rolling in the Deep
Say Youll Be There
Simply the Best
Set Fire to the Rain
Super Duper Love
Sorry
The Way You Make me Feel
Treasure
Uptown Funk
Valerie
Waterfalls
Walking on Sunshine
We Are Family
We Found Love
You Know That Im No Good
You’ve Got the Love
Ballads:
1000 years
All of Me
Everywhere
Empire State of Mind
Fallin
Get Here
Heaven
Gotta Be
I Cant Make You Love Me
I Know Im Not the Only One
If I Aint Got You
Imagine
Lately
Licence to Kill
Magic
Make You Feel My Love
Nobody Does it Better
Praying for Time
Ordinary People
Saving all my Love for You
Skyfall
Someone Like You
Stay With Me
Time After Time
True Colours
Thinking Out Loud
Turning Tables
Wade in the Water
Warwick Avenue
You Might Need Somebody
Kiss from a rose
Your song
Rock:
Alright Now
Dont Stop Believing
I Love Rock & Roll
Sex On Fire
Use Somebody
Your'e the Voice

Simone was amazing, she was very accommodating and a very lovely lady. Her voice was fantastic and everyone loved it and was up dancing to the whole gig. I would definitely recommend Simone and I will book her again for future parties.

Verified
Didier A, 2 years ago

Simone Kaye is a talented performer with an amazing voice and incredible stage presence. It has been a privilege to collaborate with her on a regular basis throughout our various London venues. Definitely someone to watch…!

I first saw Simone sing one Saturday night and was incredibly impressed by her voice and performance in such a crowded bar. I saw her again a few weeks later and I can honestly say she's the best live singer I've ever seen. I asked Simone if she would be interested at singing at my birthday party in Edinburgh in a few months time and she agreed. It was a wonderful party made all the more special by the fact that Simone had travelled all the way up to Edinburgh to sing some of my favourite songs in front of my family and friends. She's a wonderful artist and entertained the crowd throughout the night and got everyone up dancing. Very professional and experienced with a beautiful soulful voice and she knows exactly what music to play between sets to keep the party going. She's so good in fact I've just booked her for my wedding next year and can't wait to hear her sing again. Highly recommend Simone for a really special voice and performance.