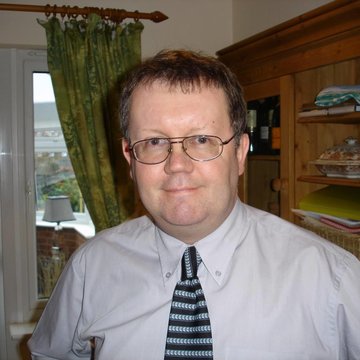 Simon was born in Liverpool. He studied organ at Birkenhead School with Timothy Lawford and then at Cambridge as Organ Scholar at St. Catharine’s College, where he continued studies with Gillian Weir and the late Peter Le Huray. After Cambridge he was appointed Assistant Organist at Chester Cathedral but decided after a while to keep music as a hobby and gain fortune from computer keyboards. He was firstly accompanist and then Music Director of the Hoylake Choral Society from 1982 until he moved, in 2000, to Nantwich where he is Organist at St Mary’s Parish Church. He is an annual recitalist at Bangor and Chester Cathedrals and is on the 'reserve' organist list playing for visiting choirs and covering holiday periods and other absences. He is also in demand as an organ, piano and theory tutor and has many Associated Board and other pupil distinctions and diploma successes to his credit. Since May 2014, he has been a full-time professional freelance musician and as well as being accompanist to the Nantwich Choral Society, he is also accompanist to the Jubilate Chamber Choir, based in Cheltenham. Simon is also an examiner for the London College of Music and the Regional Coordinator for the North of England for the Royal School of Church Music

Please get in touch as soon as possible.

This is not applicable.

Verified
Martin A, 2 years ago

The music for the service was quite exceptional and we all felt that your organ playing was very impressive. The deaconess said that was the best she has heard the organ sound and it certainly blew any cobwebs away! Many people spoke to us and expressed the same view. Hopefully you felt that the singing was enthusiastic and kept tempo with your playing, something Dad, we are sure, would definitely have approved of. Even the more critical musicians in the family were impressed and uplifted by your playing and we all wanted to pass on our thanks to you. A very memorable day for all concerned and one that Dad would undoubtedly have approved of. Many thanks once again. Best wishes,

Very fortunate to have the resources of our gifted accompanist, Simon Russell

Very fortunate to have the resources of our gifted accompanist, Simon Russell