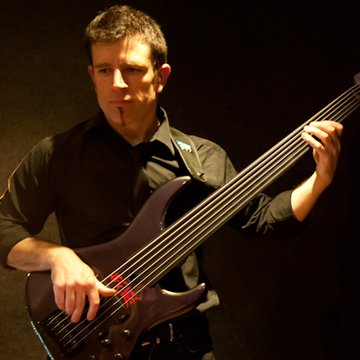 Born into a musical family, Simon Brewin was started on the piano at the age of about 2 and was writing music at 6. Fascinated by music, he would often listen to his father’s classical records for hours. He moved onto brass instruments at 8, playing in his local Scout band. At 16 he switched to guitar. He studied classically for a year, then took private lessons with composer and session musician Steve Dodds (Mica Paris). "I am always grateful to Steve for teaching me to play the blues first. I think it's crucial to learn to express yourself musically very early on, then you understand what technique is for: to allow you to express yourself more clearly." Simon also completed the Rock Metal and Intermediate guitar courses at the Guitar Institute in London. At 22 he attended Berklee College of Music in Boston for 2 years on the Performance Studies course, studying different styles, music theory, sound reinforcement, composition and film scoring. He graduated with the Berklee Certificate having made the Dean's list for Excellence every semester. On returning to the UK he played regularly in and around London with rock bands, the jazz-funk improvisational group the Kings Cross Project house band and formed the jazz-funk band Mobius with Otto Williams (Ray Charles, Chaka Khan, Amy Winehouse). On moving to Brighton he formed the jazz duo Indigo which grew into one of the most popular duos on the south coast, performing regularly, making two appearances on BBC Southern Counties Radio and recording the album “Old, New, Borrowed and Blue”. "Being the instrumentalist in the duo really helped develop my technique and groove skills". At this time he also studied keyboards with renowned pianist Terry Seabrook (Cubana Bop). More recently he has been working with a wide range of bands in genres across pop, blues, rock, jazz, funk, ceilidh, ecstatic dance and even beat poetry, as far afield as Denmark and India. He can regularly be heard with Licence to Ceilidh, The American Sector, Pop Sonic and at the jam night he runs The Brighton Groove Project. His studio session credits include the critically acclaimed "Up on the Downs" and "Waves of Translation" by The John Lake Trio, The Broadway project (Memphis Industries/XL Records), "Mutable Music" and "Drum Travel" (with James Asher and Sandeep Raval), and Jimmy Kaleth (Laura Branigan). He composes and records his own material in his studio and with production music guru James Asher. One of his compositions was used for the ITV series "Edge of Heaven". As a teacher, his students have gone on to have successful careers in music, playing the Albert Hall and supporting Level 42, and with numerous studio credits including Tinie Tempah and Rose Royce. The last few years have seen Simon performing more regularly on bass. "As I have matured musically I've got more into groove and the sound of the bass. The bass performs a very important role in the band and I love the opportunities this brings". In 2012 he acquired his 6 string fretless bass, made by Bernie Goodfellow of GB Guitars. "I love the tone of the fretless and the scope it allows for expression. My Spitfire is a truly wonderful instrument with an incredible sound.". He also plays synth bass, offering a whole different palette of sounds for funk, pop and dance. Simon's compositions take form in a variety of genres including classical, folk, funk, dance, indie, nu jazz and ambient/chill out. Simon cites his influences as both varied and very numerous. "During my journey of becoming a musician I have been inspired by so many different people at different times. I would go through a technique phase and be listening to really technically masterful players, then at other times I would be inspired by more spacial and emotional music. Ultimately I enjoy anything with melody, groove and soul, in any genre!". Looking to the future Simon reflects "I'm looking to move forwards all the time. I am really driven by my passion for music, whether in the studio or live, composing or playing covers and I am constantly striving to improve my skills and knowledge."

9 to 5
Ain't nobody
All about that bass
All night long
All of me
All right now
All the small things
American boy
Apparently nothing
Are you gonna be my girl?
Autumn Leaves
Back in Black
Best of my love
Billy Jean
Blame it on the boogie
Blinding Lights
Blurred Lines
Boogie oogie
Boogie wonderland
Brick house
Brown eyed girl
Cake by the ocean
California gurls
Call me Al
Can't stop the feelin'
Cantaloupe island
Car wash
Celebration
Chain of fools
Chameleon
Chasing cars
Chelsea dagger
Chicken
Chocolate
Cissy Strut
Come together
Country Roads
Crazy (K Barclay)
Crazy in love
Crazy little thing called love
Cuddly Toy
Dance to the music
Dancing in the moonlight
Dancing queen
December 1963 (what a night)
Disco inferno
Do I do
Does Your Mother Know
Domino
Don't stop believin
Don't stop me now
Don't stop til you get enough
Dynamite
Ever fallen in love
Everybody dance
Express yourself
Fever
Finally
Firework
Flashlight
Forget you
Funky Nassau
Get down on it
Get Lucky
Get up (sex machine)
Get up offa that thing
Gimme some lovin
Good times
Got to be real
Green onions
Hallelujah I love her so
Happy
Hard to handle
Hey Joe
Hey Jude
Hey Ya!
Higher and Higher
Hit the road jack
I can't feel my face
I feel good
I got a woman
I gotta feeling
I heard it through the grapevine
I saw her standing there
I wanna dance with somebody
I want you back
I will survive
I wish
I'm a believer
I'm coming out
I'm every woman
I'm outta love
If I ain't got you
In the midnight hour
Is this love?
Isn't she lovely?
It's love
It's your thing
Jonny B Goode
Jungle boogie
Just dance
Just the two of us
Kiss
La bamba
Lady Marmalade
Landslide
Le Freak
Let's get it on
Let's stay together
Living on a prayer
Locked out of heaven
Long train running
Love shack
Lovely day
Macarena
Make you feel my love
Mamma mia
Master Blaster
Mercy
Move on up
Moves like jagger
Mr Brightside
My baby just cares for me
My first, my last
My girl
Never too much
Nowhere to run
On Broadway
Only girl in the world
Pick up the pieces
Piece of my heart
Place your hands
Play that funky music
Price tag
Proud Mary
Rather be
Rescue me
Respect
Rock with you
Rock your body
Rolling in the deep
Rude
Runaway baby
Sax
September
Sex on fire
Shake it off
Shake your body down
Shout!
Shut up and dance
Signed sealed delivered
Sir Duke
Sittin on the dock of the bay
Sledgehammer
Smooth criminal
Somebody elses guy
Somebody told me
Son of a preacher man
Song 2
Soul man
Stacy's mom
Stand by me
Strasbourg St Denis
Stratus
Street life
Stuck in the middle with you
Summer of 69
Summertime
Sunny
Super duper love
Superstition
Sway
Sweet Child o mine
Sweet home Alabama
Take on me
Tears dry on their own
Teenage dirtbag
That's the way
The electic slide
Think
Treasure
Twist and Shout
Upside down
Uptown funk
Valerie
Wake me up b4 u go go
Walk this way
Walking on sunshine
Waterloo
We are family
We found love
Wonderwall
You got the love
You really got me
You're still the one
Customer questions

The groove! For me the bass is about supporting the singer/lead instrument while adding groove and harmonic support, cos if the bass is right the whole band sounds good.

It's very common that timings change on the day and I allow extra time for this. Significant time changes (2 hours or more) may clash with other bookings so please contact me as soon as possible if you are concerned about this.

Yes, I provide background music in breaks as a matter of course. There is no extra charge.

Sure, please get in touch with any special requests.

Yes, I have everything I need and transport to get it to you. Please contact me if you have any special requests.

Yes, depending on the complexity of the piece and the time allowed to learn it. Please get in touch if you have any requests.

Standard Prices
All prices include:Travel to within 50 miles of Brighton. All relevant gear provided
NEW!Virtual services
Remote Sessions
I can provide high quality bass stems for your tracks, recorded remotely in my studio. Please check out my Remote Session demo
£90

Simon Brewin combines skilful chops on guitar and bass with an alert and flexible musicality that allows him to write and play his many ideas effortlessly. His musical range is diverse, and he equally at home with jazz, blues, funk or melodic material. Add to this his engaging optimistic personality and ready wit, and you have an excellent addition to any performing or recording team.

Simon is an excellent guitarist