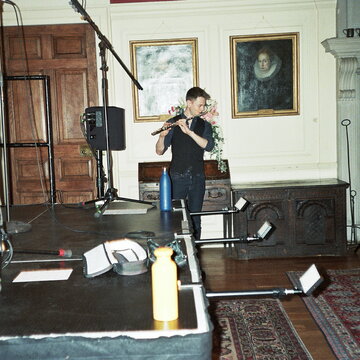 London based Musician/Actor, experienced as a soloist and as part of folk, jazz and classical ensembles. Composer and Arranger for theatre.
3 of 10 photos
Flautist
Steyning
Public liability insurance of £10 million

While learning the Flute, I worked constantly with a variety of ensembles, orchestras, chamber groups and bands to ensure my experience was not just with my instrument but with musicianship in context as well. I completed my Grade 8 exam in 2011, and continued to play with Sussex based jazz band the Murray Way Swingers as a frequent soloist, folk trio Two and a Half Musicians, and The Sixth Players, a folk band specialising in popular song covers. I performed in pit orchestras for several local musicals, and composed some original solo pieces for underscoring and live performance in plays, also working as a soloist for weddings and events. I secured a scholarship to a leading UK drama school, and trained as an actor. During this time I began teaching flute, and worked further with incorporating live music into theatre and composing or arranging for shows; I created a live instrumental Jazz underscore for GSA's production of A View from the Bridge, and arranged a series of traditional (folk and religious) a cappella songs for GSA's production of Tanya Ronder's 'Table', which transferred to London's Waterloo East Theatre following its opening at The Yvonne Arnaud Mill Studio in Guildford. I was also brought in as a performer, Composer and Musical Director on the EU Theatrical Bridges production of The Tempest with the Petrovden Shakespeare School, Bulgaria, for which I set Shakespeare's song lyrics featured in the original text to new music which I composed from both UK and Bulgarian folk traditions. Since leaving drama school I have worked consistently as an actor and continued to utilise my experience as a musician, working as resident Composer and Musical Director of Sussex-based theatre company This is my Theatre on their recent touring productions, using Maritime, Scottish Gaelic, English and Irish Folk music. I have also continued to work as a freelance folk performer and as both an Actor/Musician and Composer with London-based theatre companies PRG and Who Said Theatre.

For our production of Romeo and Juliet I wanted the music to suit our surroundings of ancient church venues. Simon composed beautiful unaccompanied sung latin verses which, when performed by the company, created such an incredible atmosphere. He was sensitive and responsive in rehearsals and ensured complete understanding of how I wanted to use choral voice within the overall concept of the show. His professional approach made this aspect of the production really easy.

Simon played the flute at my daughter's wedding and added something extra special to the day. Although originally engaged to perform as part of the Jazz band in the evening, he also played classical pieces as she walked down the aisle (which made it very special!) and during the ceremony. It was a wonderful day and we can't thank him enough for the part(s) that he played!

with live music composed and specially selected for the production by actor/musician Simon Stallard, I am delighted to premier our version of the play this year

Sterre A, 7 years ago

Simon is a delight to work with, always ready to try out an idea as well as coming up with the most wonderful and suitable arrangements and compositions. He is a passionate performer and creator, truly an asset to any company. I would highly recommend him as an actor, musician and human being; we always keep him in mind for future projects and have repeatedly worked together successfully.

You all sound divine! The arrangement is fabulous!"