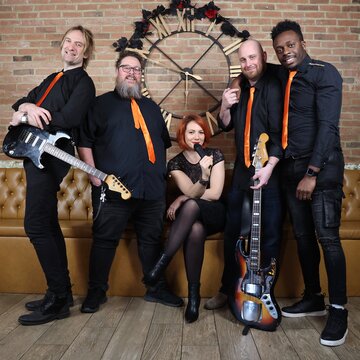 Silent Assassins are a kickass 5 piece professional function band based in the South of the UK. Made up of professional musicians and long time friends, it became apparent to the team they were missing a trick by not forming a function supergroup on their doorstep. The line consists of Kate Stevens on lead vocals, Adam Flanagan on bass guitar, Drew Lowe on lead guitar, James Massiah on keyboards and Dave Allon on drums. A key factor in the band’s formation was using a top quality electric drumkit – the benefit being the entire band could be run straight through the front of house PA system. With all musicians also being on In Ear Monitors there is no additional stage sound – meaning the band can produce a crystal clear quality sound every time, irrespective of stage acoustics. They hear exactly what their audience hears! With a repertoire that covers all the usual classics you would expect to hear, this band aim to provide a few additions to stand out: you’ll hear influences from 80’s movies, 90’s boybands, and of course MJ. The band also has a strong rock heritage with experience playing such stages as Donnington and the Hammersmith Odeon, so you can be sure if you want to rock out they can deliver. ​

Yes The Singer is Kate Stevens www.katestevensvox.com We do have pre-audititioned 'dep' musicians available in case a band member falls ill or is unavailable but this would be rare.

No problem at all. For an additional amount you can select this option.

We usually set up about 2 hours before the performance time. This ensures us we can go on smoothly with no hiccups.

Yes you can. We have a vast setlist of songs to choose from which can be custom tailored to your needs for the event.

Yes our PA and Lighting is included in the quote.

Yes we've included in our cost price an additional 2 songs which will need to be pre arranged in our consultation.

Silent assassins played at our wedding and they were brilliant. Everyone was up dancing to their fantastic set. They really made the evening and we are so glad we booked them. Also they were very organized and accommodating when it came to all the administrative arrangements.

A perfect band for my perfect birthday! Thanks Guys!