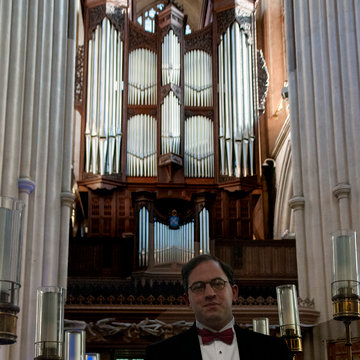 SHEAN BOWERS is Assistant Director of Music and Organist at Bath Abbey. He has held this post since September 2010, having previously been Director of The Royal Liverpool Philharmonic Training Choir and Organ Scholar at Liverpool Cathedral. Shean's musical career began at an early age, when he was accepted as a chorister into the Choir of Liverpool Cathedral. Scholarship grants enabled Shean to study the organ with Professor Ian Tracey. He was then awarded a full scholarship to study at Chetham’s School of Music; The Royal Academy of Music; Liverpool University and The Royal Northern College of Music. Duties at the Abbey involve assisting with the training and conducting of the Abbey Choirs; playing the organ for statutory services; directing the Abbey’s youngest voices – The Melody Makers (a choir which Shean founded in 2011 for children between 6 – 11 years old) and directing the Bath Abbey Schools’ Singing Programme, which sees him going into many schools and helping over 1000 children a week ‘Find Their Voice’. Since being in post, Shean has directed, and accompanied, the Abbey Choirs and Melody Makers on BBC television and radio broadcasts, and has developed the Abbey’s Singing Programme, which Shean founded, making it the second largest in the United Kingdom. Upon the retirement of Peter King as Director of Music at Bath Abbey, Shean was invited to be Acting Director of Music, for a five-month term. During this time, Shean increased the number of boys, girls and men in the Abbey choir; successfully organised and directed an Abbey choir tour to Paris and ordered a Christmas Oratorio from Jools Scott and Sue Curtis for the boys, girls and Melody Makers, accompanied by the Bristol Ensemble. This was premiered at the Abbey during December 2016 to a capacity audience. Alongside this, Shean was responsible for the smooth running of the department; planning, preparation and delivery of music at all statutory services; direction of Melody Makers and leadership of the Abbey’s Schools; Singing Programme. As an accompanist, recitalist and choir director, Shean has performed up and down the country as well as in France, Germany and Denmark. Shean recently returned from a concert tour of Germany and has been offered a return invitation to tour Denmark during 2018. He has played as soloist with several orchestras including The Royal Liverpool Philharmonic Orchestra, The Halle, Chetham’s School of Music Symphony Orchestra and Bath Philharmonia. Most recently, Shean performed the Poulenc Organ Concerto and Saint-Saens Organ Symphony with the Bath Philharmonia, on the Abbey’s Klais Organ. He is in great demand as a music educator, examiner and adjudicator. Shean is one of the organists for BBC Daily Service and a regular workshop leader for The Royal School of Church Music. Shean is director of the Bath Choral Society and Bath’s Aquae Sulis Chorale, a chamber choir made up of local professional and semi-professional singers. With a special interest in training young voices, and as a church organist, Shean is committed to the development of the next generation of musicians.

Flexible and able to arrange music or play whatever client wishes.

Shean was amazing and a real professional for our wedding on Friday 21/10/22, communication was great all the way through , can’t Thankyou enough for performing for us ! Thankyou !

RB
Richard B
5 years ago

Shean is a fabulous organist. He made a transforming difference to our daughter's wedding ceremony.