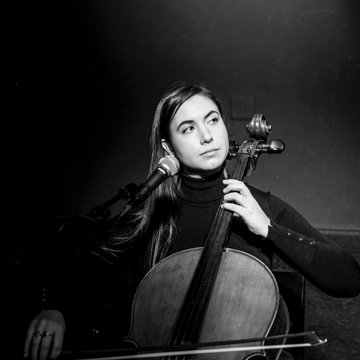 Shabnam Gould is a British-Iranian cellist, singer, arranger and teacher working in London, UK. She graduated with a Postgraduate Diploma from Trinity Laban Conservatoire of Music and Dance in 2017 where she studied classical cello performance. Working as a freelance session musician and arranger, Shabnam has played at various UK venues including The Barbican, The Royal Albert Hall, Birmingham Symphony Hall, Cadogan Hall, Union Chapel and The Southbank Centre. Her touring work has taken her across Europe several times, playing at venues that include Paradiso NL, Olympia Theatre IE, Ancienne Belgique BE, Radar Festival ZH and The National Concert Hall IE.

very professional, beautiful playing and really made our day, thank you!

Shabnam is an excellent teacher to my daughter, encouraging her in every lesson and keeping the cello fun! We're very happy to have Shabnam as her teacher

Cellists in the UK
Singer (mezzo soprano)s in the UK