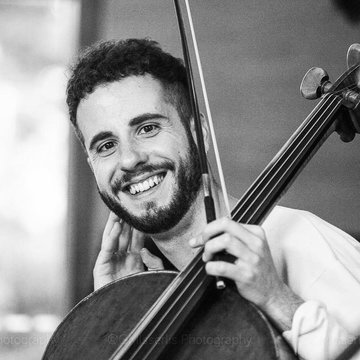 Born in Madrid, Sergio came to this country at the age of 12 and soon won a place as co-principal cellist in the National Youth Orchestra of Great Britain, later becoming a student with Richard Lester at the Guildhall School of Music and Drama. As part of the Eka Quartet (formed at the GSMD) he has performed in venues such as the Wigmore Hall and the Austrian Cultural forum and in concert series and festivals such as the Norfolk Concert series, Guildhall Artists Barbican concerts, the City of London Music Festival, Richmond Concert Society and Ryedale Music Festival. The Eka Quartet took part in the coveted IMS Prussia Cove master class series in 2013. He has recently graduated from the RCM having completed his Master's in Performance (Distinction) with Helene Dautry and enjoyed opportunities to perform in the Purcell Room as well as being appointed section leader in projects with Sir Roger Norrington and Ilyich Rivas. Sergio enjoys a varied platform of performing opportunities, recording sessions and musical collaborations across arts and genres, with a particular focus on chamber music. Amongst other collectives, Sergio is a member of the exciting 12 ensemble which has quickly made a name for itself with its residency at The Forge and tours to Italy to perform at the late William Walton's house in la Mortella. They will be launching their debut album later this year and have featured in BBC Radio 3s In Tune programme.