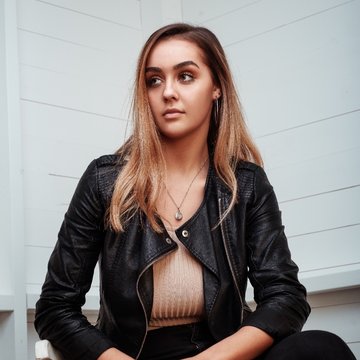 Serena Richelle is a vibrant up-and-coming talent whose original songs comprise of electronic hooks, driving beats and heartfelt lyricism. Her pop/R&B style songs fuse exciting melodies and punchy rhythms with her warm, smooth tone, and envelop the listener into whatever dimension of her life she was writing about at that given time. The 19-year-old singer, songwriter, actress, dancer and musician was born and raised in Leicester however is currently studying a degree in musical theatre at the Hammond in Chester. She has obtained a wealth of musical knowledge as a result of numerous years of both studying and indulging in the craft, enjoying and immersing herself in every aspect of making music. Since the age of 11, Music has been at the forefront of Serena’s mind as she began to pen her own original songs following on from a lifetime of singing and dancing and having a passion for music. She has invested copious amounts of time and effort into developing her style and evolving as an artist, taking inspiration from musicians she looks up to such as Ariana Grande, Jack & Jack and H.E.R. In January of 2017, Serena bursted on to the music scene when she released her debut single So Bad which received airplay on BBC introducing just days after its release. Since then she has continued to release various singles which have all proving popular with her ever-growing fan base. Serena is a massive advocate for individuality and aims to spread positivity with her music. She has a passion for helping people with her talent, she says: “all I’ve ever wanted to do in life is to simply help people, to inspire them and to entertain them in whatever shape or form. Even if I manage to make one person smile for a second then my job is done.“

Serena is a phenomenal singer and has years of acting and musical theatre experience. I would definitely book Serena for any type of event you are planning from a pub/club gig to a wedding reception!

With a vast social-media following behind her and various shows and competitions under her belt, Serena is an exciting and unique artist whose versatility and ability set her aside from many others in the industry today. As well as being the owner of the ability to write catchy pop songs of which she continues to do, she has performed in musicals such as Annie and Chicago and wishes to progress in every aspect of her career.

Singers in the UK
Singers in Liverpool
Singers in Cheshire
Singers in Merseyside
Singers in Warrington
Singers in Crewe
Customer Service
Discover
Company
As seen on
© Encore Technologies, Ltd.
Crafted with bagels and in London