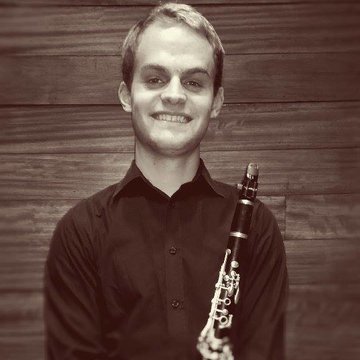 Freelance clarinettist currently studying a Master's of Music in Performance (MMus) at the Royal Northern College of Music.
Clarinettist
Manchester

Seb Marshall is a young clarinettist and conductor currently living in London working as a freelance musician. He recently gained a first-class music degree from the University of Manchester, and enjoyed playing a key role in the university’s music society alongside his studies. He often played principal clarinet with the university’s symphony orchestra, in such repertoire as Nielsen’s Fifth Symphony, Shostakovich’s Fifth Symphony, and Mahler’s Fourth Symphony, and he has also led the university’s wind orchestra. In October 2015 he appeared as clarinet soloist in Debussy’s Première Rhapsodie with the symphony orchestra, and in March 2016 gave the world première of a newly commissioned double concerto for clarinet, sheng, and chamber orchestra. In his final year Seb was the Assistant Conductor of Ad Solem (the university chamber choir) and The Cosmo Singers, as well as principal conductor of the Manchester University Wind Orchestra, and he took conducting lessons with Mark Heron and Justin Doyle. He was also the musical director of the university men’s barbershop chorus. Since graduating, Seb has been regularly engaged as a freelancer, playing in contemporary chamber music concerts and tutoring woodwind sectionals on orchestral courses. He enjoys working with children, and since September 2016 has been the conductor of the Junior Band at the East Barnet Music Centre. He currently has a full schedule of peripatetic teaching of clarinet, saxophone, and music theory, and has also been employed as an arranger of a cappella music, something he enjoys doing in his spare time. During his gap year Seb studied clarinet at the Trinity Laban Conservatoire of Music and Dance in London, and also took conducting classes with Gregory Rose. At Dame Alice Owen’s School he was actively involved in the music department, winning the music prize in his final year as well as performing Crusell’s Clarinet Concerto no.2 with the school’s symphony orchestra. Seb also has an ATCL diploma on clarinet, and next year he is planning on auditioning for a postgraduate course on clarinet at music college.

Verified
Josh B, 2 years ago

Northern Quarter have been my main introduction into barbershop and they've won me over completely. They made me laugh and cry with their performances at BABS this year and I cannot wait to hear what stunning music and shenanigans they do next. Love these guys!

Verified
Sophie B, 2 years ago

I recently booked Northern Quarter for a show within my University, and they were amazing. They are really talented guys, who are proving that barbershop singing isn’t only for old men in straw boaters! They currently hold a national gold medal, which is well deserved, and I can’t wait to see how far they go!