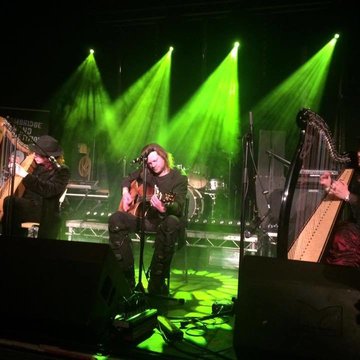 Harp-based acoustic rock trio with great stage presence performing a mixture of original pieces and unusual arrangements of classics. We have over 20 original pieces and also perform quirky arrangements of classics from: Pink Floyd, Metallica, Iron Maiden, Bon Jovi, Chris Isaac and Foo Fighters - in a way you've never heard it done before! We've played at Woburn Abbey, at the private Oxfordshire home of late Bee Gee Robin Gibb, and at large venues/festivals including Camp Bestival, Bestival, The Cambridge Junction, Oxford's South Park and at celebrity events across London.

Vicki A, 5 years ago

Schrödinger's Strings are a brilliantly talented group of musicians who offer a refreshingly unique style of performance. I always enjoy watching them perform at our Heritage Foundation events where they are regular entertainers.

An extraordinary sonic experience, Schrödinger's Strings are a combination of hard rock, whimsy and delicacy. With the melodic lines of famous rock songs and infamous original numbers rendered on harps and a guitar, this truly is the music of the spheres.

I have seen the Strings now on numerous occasions and they always put a smile on my face . Their choice of material is superb and the fact that two harps, a guitar and a voice is their total sound makes it all the better . I will certainly be booking them for JD's again.

Great music presented in a completely unique and special way.

I first heard Schrödinger's Strings play in the garden of Hertford Museum as part of the Hertford Music Festival. I was amazed by their varied repertoire and the delightful sounds of the harps and vocals. The band then kindly played at my Charity Civic Dinner. Many of the guests had not heard the band play before and they were unanimously impressed.