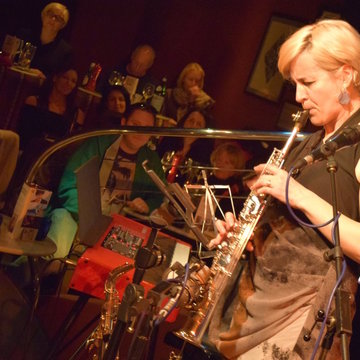 Check availability and get a free quote now - no commitment to book
From£180
Watch & Listen
About Sarah
Song list
Reviews
Home page
Sarah Chaplin
Like Sarah?
Watch & Listen
Watch
Listen
1-3 of 3 videos
Dark Matter
You've Got the Wrong Guy
When You Sleep

I sing and play flute and sax. I grew up in Lancaster and while all my friends were into punk and new wave music, I had a secret passion for jazz. I played trombone during my teens, then took up alto saxophone at the age of 21 . While my three children were growing up, the saxophone took a back seat, but in 2012 I started playing again, completing the three year jazz programme at Citylit as well as being active on the London jazz jam scene, including hosting the jazz jams at Sligo Jazz Festival in 2015 & 2016. I've played gigs with many different line-ups across London including the London Jazz Flute Big Band, and now leads my own duo and septet. I released my debut album ‘Firehorse’ in March 2016, featuring 11 of my own tunes, and my debut vocal album ‘We Both Are Lost’ came out in November 2017. I've played at PizzaExpress Jazz Club, the Spice of Life, The Pheasantry, the 606 Club, and many more venues across London the south east. I also co-founded the listings service JAZZLONDONLIVE in 2016, present a weekly JAZZLONDONLIVE radio show on Brooklands Radio on Thursday nights, and write occasional reviews for LondonJazzNews.

thanks Sarah and Pete, you played a lovely opening set at our inaugural event at Library, and really set the tone for the rest of the night with your relaxed, intimate acoustic vibe.

Sarah Chaplin & Pete Duncan: Vocalist, saxophonist and flautist Sarah Chaplin plays regularly with guitarist Pete Duncan and the duo swing out nicely on an interesting selection of jazz standards together with some laid-back contemporary numbers and a touch of Latin

The Sarah Chaplin Duo played every other Friday night at an intimate fine dining venue in southwest London that I programmed music events for. Their varied and tasteful sets always went down very well with the clientele and also with the restaurant owner, who was complimentary about how well they played and created a suitable atmosphere.