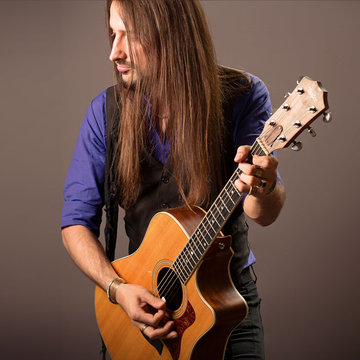 Santiago Periotti Santiago Periotti is a singer, guitarist and songwriter from Santa Fe, Argentina. He has performed his music throughout the world for more than 15 years, touring on Argentina, Mexico, Ecuador, Australia, New Zeland, Brazil, England, Italy and among others. He is characterized by a Blues/Rock sound, but he ventures into other styles like Soul & Pop music through a vast repertoire of cover songs. In this capacity he has entertained audiences on cruise ship and in hotels, casinos and bars, as well as at international festivals and large venues throughout Latin America on English, Spanish and Italian languages. Santiago has 2 contracts with P&O Ferries UK, 2 with Brittany Ferries and 3 contracts with the Cruise Ships Company “P&O Australia” as a musician and during the last one working as Music Coordinator. He has 7 albums releases under his belt being musician and producer. Currently playing as a solo and touring on Europe with his new record. Santiago Periotti E17 6QY, 21 Russell Road London, UK

Standard Prices
All prices include:- PA System - Trasportation included up to 20 miles - For gigs out of London: has to be included transportation and hotel

Very professional, we had a great time with all those classic songs! Recommended.

Santiago is an absolute pleasure to work with. Not only is he a fantastic musician he has a great attitude, he's professional, always on time and great when interacting with the audience. Our guests were consistently complimenting his performance and asking when he would be performing again. I would recommend Santiago to any venue looking for high quality entertainment.

Verified
Roxanne B, 3 years ago

This supremaly talented young man made my holiday!!! Santiago is the "real" Jewel on the Jewel... (P&O Australia, 2018)