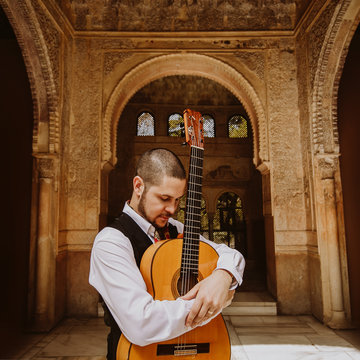 Samuel is a highly skilled flamenco guitarist who's beautiful music brings a ray of sunshine to enhance any event he is booked to play at.
3 of 5 photos
Guitarist
Ilkley
Public liability insurance of £10 million
Verified profile

Solo flamenco guitar music lends a wonderful and exotic atmosphere to any event and Samuel Moore does not disappoint with his mastery of the tradition. Samuel Moore is a nationally respected flamenco guitarist with a vast performance repertoire and professional experience. He was taught to play by the world-renowned flamenco guitarist Juan Martín and has since gone on to sculpt his craft performing in some of the world’s top concert halls. Samuel's musicianship has been described as “Fantastic!” by BBC Radio 3, “Masterful!” by the legendary jazz guitarist Kenny Burrell, and “very tasteful playing that makes the guitar sing.” by Guitar International Magazine. Alongside Samuel’s busy international tour schedule, he is also available to perform at private events: weddings, parties, corporate engagements and proms. For all such bookings, Samuel presents wonderfully crafted, diverse and virtuosic solo guitar sets steeped in the richest and purest forms in the flamenco tradition. From fiery and dazzling palos such as the bulerías, to foot taping Latin American rhythms such as rumba, and even subtle and moving flamenco laments such as seguiriya, Samuel brings a ray of Mediterranean sunshine to enhance any occasion. Don’t miss out, book him to perform at your event today!

I always try to be flexible to help ensure your event runs as smoothly as possible. If timings change slightly in the run up to the event just let me know.

I usually set up about 1 to 1.5 hours before the performance time.

My set lists are crafted from countless performances and learning what works best to ensure guests have an amazing time. However, we're definitely happy to chat through and make sure we find what works for your event.

Yes, absolutely! I bring my own instrument, PA and microphones.

If a song isn't included in my song list there may still be a chance I already know it. We can discuss this in a Skype consultation session.

KB
Kenny B
9 years ago