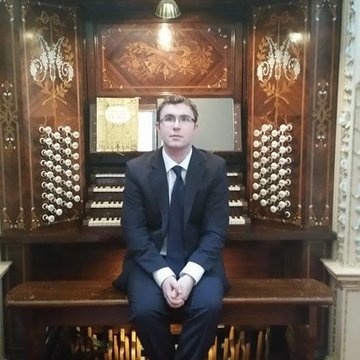 Samuel Bristow is a fourth year BMus (Hons) student at the Royal Birmingham Conservatoire. He studies organ with Daniel Moult and Henry Fairs, and also receives tuition in choral conducting from Paul Spicer. During his time there he has been the recipient of the John Campbell Keyboard Prize, and acted as accompanist to the renowned Royal Birmingham Conservatoire Chamber Choir under the direction of Jeffrey Skidmore. He is also Organ Scholar of Birmingham Cathedral where, as well as playing for services, he assists in the training of the choristers and is accompanist to the St Philip’s Singers. He was previously Organ Scholar of Coventry Cathedral. There he worked closely with Kerry Beaumont and Paul Leddington-Wright, and regularly accompanied the cathedral choirs. He was also a finalist in the Northern Ireland International Organ Competition 2017, and was the recipient of the 2017 May Dale Young Organ Recitalist Award. He has broadcasted for BBC Radio 4, BBC WM Radio, BBC Radio Coventry and Warwickshire and recently made an appearance on BBC One's 'Songs of Praise'. In September 2019 he will take up the Organ Scholarship at Salisbury Cathedral. Prior to this, he was Organ Scholar of Cirencester Parish Church and studied under Dr Anthony Hammond and Dr David Ponsford. During this time he gained his Associateship of Trinity College London diploma with Distinction. He has attended organ study trips taking him to France, Germany and the Netherlands, enabling him to participate in masterclasses with Martin Schmeding, Pieter van Dijk, Arvid Gast, Joachim Vogelsänger, Ullrich Bohme and Eric Lebrun. Increasingly active as a recitalist, he has performed in venues throughout England and Scotland. Recent engagements include Truro, Bristol, St Paul's, Portsmouth and Glasgow Cathedrals; University of St Andrew’s, Scotland; St Michael and all Angels, Croydon; Blenheim Palace; Orgelpark, Amsterdam and St Petri Kirche, Hamburg. Future concerts include St Mary Redcliffe, Bristol, Blackburn Cathedral and St George's Hanover Square, London.