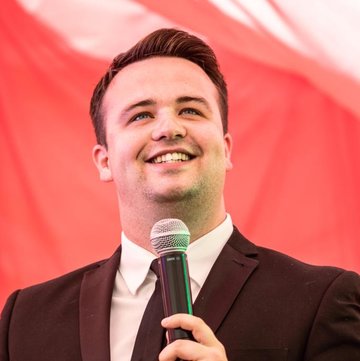 3 of 7 photos
Singer
London
Public liability insurance of £10 million
Verified profile
Specialising in Swing Music, Sam has been described as a "natural and confident entertainer". Also able to perform many other genres.

Sam Knight is a singer performing covers of artists such as: Michael Buble Frank Sinatra Dean Martin Sammy Davis Jr Bobby Darin Ray Charles Nat King Cole Stevie Wonder Elvis Presley The Jacksons Elton John Bruno Mars Chuck Berry Olly Murs Robbie Williams Blues Brothers Sam Cooke Jackie Wilson Luther Vandross And many more! Sam is a natural and confident entertainer and has a real passion and appreciation for the music he performs from Swing, Rock n Roll, Pop, 80’s, Soul, Ska and Reggae to modern day hits. He has been working as a singer at weddings, functions, clubs and events since 2015 and already has built a following as an entertainer and talented singer. For a man of 23, Sam definitely has a voice beyond his years. Specialising in 50’s/60’s and Swing Music, Sam has been described as a "natural and confident entertainer" with a "powerful and smooth voice" and likeable personality to match which comes across in his performances. Always providing an energetic and charismatic performance, no matter what the occasion Sam is guaranteed to get the party going. His repertoire is increasingly growing, with new songs being added on a regular basis Sam has performed in front of a variety of audiences, include intimate club gigs for 20 people, through to casinos, shopping centres and even a firework display in front of 8,000+ people. In December 2014 and 2015 he headlined his own Christmas Show. In 2016 Sam was also chosen as the opening act for the Saturday at The Brentwood Festival, featuring in a line-up that includes Level 42, ABC, Tony Hadley, Soul II Soul and the Boomtown Rats, where he was well received with some claiming this his performance was one of the performances of the whole festival and has been asked to return in 2017 as a support act to Status Quo amongst others. He is currently building up a wide variety of venues in his portfolio, including many restaurants, pubs, bars, Working Men's and Social Clubs and Royal British Legion Social events. He has also performed at weddings, Rat Pack nights, Charity Dinner Dances as well as many other types of event. Set lengths can be catered to your particular needs from a few songs to a full evening's entertainment, from relaxed background music to a party atmosphere, please contact us with your requirements. Sam is also available to perform a specific Legends of Swing tribute show featuring the swing classics from the Masters of Swing. If you are also looking for a DJ in additional for your event Sam is able to provide a music service ensuring the music continues all night long. Please contact for availability as occassionaly circumstances change and previously booked dates become available. Also depending on timings it may also be possible to for Sam to appear at more than one event in a day.

We will always try our best to be flexible with timings to suit your needs. Please contact us if there are any timing changes in the run up to the event.

As standard, music will be played in between sets, appropriate to the event (e.g chilled music if a dinner, music to dance to if a party). A DJ set before or after the performances can be provided via the PA for an extra cost.

We would normally arrive and allow approximately 45 minutes prior to set up.

All equipment needed for the performance will be brought along to the event. The only thing that we require is access to power.

Sam has a wide range of songs that he is able to perform. However if you have a specific song in mind and it is not on the list Sam will try yo learn the song, if it is within his vocal range, However this may not always be possible.

We receive a lot of comments about the Style of music performed by someone of Sam's age which they do not expect him to sing. He has a wide variety of genres and is able to perform from a large repertoire so that all required styles are covered, If necessary, by reading the crowd, he may change the sets on the night to fit.

Fireworks Displays in Essex with 8,000 people attending Brentwood Festival as one of the support acts to Status Quo and Level 42 amongst others.

Sam was absolutely fantastic, cannot recommend highly enough. He appealed to a wide range of ages - it was a 50th birthday party and ages ranged from 10 to 75. Can’t wait for my 60th so I can book Sam again!!

Two shows and two very professional sets. Everyone that could not make the night was told but everyone that did what a great night they had

Sam came very close second to gig of the Brentwood Festival with his swing songs. He was Fab

Just a quick note to say a Big Big Thank you for last nights entertainment at the Club, Lisa was absolutely thrilled and had a fantastic evening made that bit special with the performance you provided. We have today received some great feed back from those whom attended last night and we appreciate you doing that bit extra for us