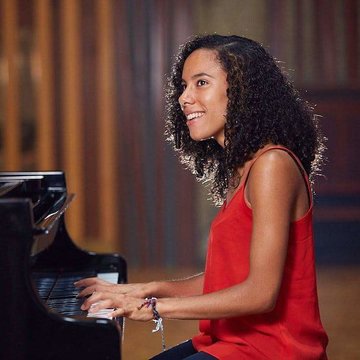 Sadie Roach studied Jazz Piano at the prestigious Guildhall School of Music and Drama in London. She released her first EP, 'Hooked on Love' in 2016, and it was soon played on BBC Radio 2 by Paul Jones. She has been playing piano and singing since the age of four and since then has completely immersed herself in the tradition of 'old school' soul, jazz, rhythm and blues with the help of her father, US bluesman, Michael Roach. She has performed at the Cheltenham Jazz Festival three years in a row, and in November 2017 performed with her father, Michael Roach as a duo at the Tamboer Blues Festival in Hoogeven, the Netherlands. 'Take This Hammer' from her most recent album 'Tryin Times', was played on Radio 2 with Cerys Matthews. She recently released a music video for her song 'A Vote for Me'.

Wayne B, 4 years ago

A wonderfully talented young woman, daughter of US bluesman Michael Roach, pianist and vocalist Sadie studied at the Duke Ellington School for the Arts in Washington DC for the last few years, before relocating to UK... Sadie is a beautiful pianist and singer; so much depth and soul in someone so young.

19 year old piano vocalist Sadie is the daughter of US blue legend Michael Roach who produced her first EP, recorded in Gloucestershire. Her modern take on soul, jazz, rhythm and blues will be a great warm up to get you in the mood for the Cheltenham Jazz Festival.