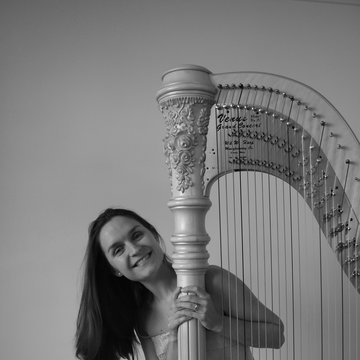 Ruth is a versatile harpist with over 30 years experience. She will enhance any event with her nimble fingers and friendly demeanour.
Harpist
Bath
Verified profile

Ruth began learning the harp at the age of 8, soon earning a Music Scholarship to Badminton School in Bristol. Her earliest performances included playing with The National Children's Orchestra of Great Britain and as a soloist in Handel's Harp Concerto at St. George's Brandon Hill, Bristol when she was 13. At 17 she became the Resident Harpist at the Bath Spa Hotel. After studying with soloist Susan Drake for 5 years, Ruth gained an Associateship to The Royal College of Music (ARCM) in harp performance. She subsequently played throughout the UK at major concert halls and venues including The Royal Albert Hall, St. James' Palace, Queen Elizabeth and Barbican Halls. She has undertaken orchestral tours in Scandanavia and France, and toured in the UK with Keble Chapel Choir, Oxford. Ruth has featured as a soloist in Rodrigo's Concierto Serenata, Debussy’s Danses Sacree et Profane and Mozart's Flute and Harp Concerto. She has accompanied numerous choirs in works such as Britten's Ceremony of Carols and Bernstein's Chichester Psalms and continues to perform chamber music with a variety of instrumentalists and singers. She has broadcast for BBC Radio and Television, and since the age of 16 has been a regular at the Theatre Royal in Bath and Bristol Hippodrome in the orchestral pit for both opera and musicals, performing works ranging from Verdi’s Force of Destiny to Rogers & Hammerstein’s Oklahoma!

She played beautifully throughout the ceremony, would highly recommend

Your playing was astounding and it made our reception extra special. Every guest at our wedding thought you were truly amazing

Thank you so very much for the lovely music on Saturday. I received lots of compliments about it, and I hope that some of them came directly to you. I think it added the perfect finishing touch to a really wonderful happy day.

Heather B, 8 years ago

Thank you so much for the music you performed at our wedding; it was even more beautiful than we had hoped. Your professionalism and talent were highly impressive and we loved your arrangements of pieces old and new. Your work was one of the most commented on features of our day: many guests remarked on the beauty of your playing and the wonder seeing a harp up close.

hank you so very much for playing such beautiful music during our wedding reception. I have lost count of how many guests passed comments, each and every one speaking very highly of your talent