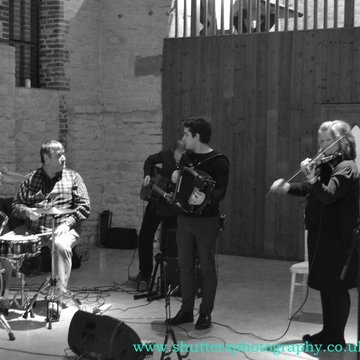 Rufus Return are a Ceilidh/Barn Dance Band on the 'rock ceilidh' side of the spectrum. Line up of Guitar, Drums, Violin, Accordion & caller.

Rufus Return was formed in 1986 by Andrew Purkiss. The name of the band came from his surname, "Purkiss", being written on the Rufus Stone (a memorial to William the Conqueror's son, situated on the edge of The New Forest) and "Return" because Andrew had just returned from Avery Hill College in London to Southampton. The original line-up of the band was Andrew Purkiss on accordion, Phil Wood on drums, Sandy Auber on flute and Peter Atkinson calling. In 1988 Andrew met his now wife Lisa Reeves, who joined the band playing flute and recorder. In 1992 following the birth of their first child, Lisa's brother Brendan joined the band playing acoustic and bass guitar. In 1994, child number 2 was on its way (who now plays a stand in roll for our drummer - Phil), so Nina Barrell joined the band playing violin. By this time, Rufus Return were playing regularly with 4 musicians and 1 part time. So Lisa decided to have a try at calling and became the regular caller for the band. In August 2000, the Purkiss family moved to Qatar in the Middle East, so Andrew was replaced by Danny Harmer on accordion - whom Andrew had taught since the age of 5! This made Phil, our drummer, the only original member of Rufus. In 2007, Nina left the band and her place was taken by Polly who plays a Bridge Violin. Rufus have performed at festivals such as Sidmouth, Towersey, Chippenham, Winchester and The Isle of Wight and also at regional ceilidhs including Cecil Sharp House, Reeling in Ealing and M27 Megabops.

Various traditional tunes from all over the world along with some original compositions. We can also throw in some Traditional Irish songs:
Tell Me Ma
Irish Rover
Wild Rover
Black Velvet Band
Streams of Whiskey
Dirty Old Town
Fields of Athenry
Among many, many others.
Ouch. There goes my Banjo String
Mr Kelly Welly
The Howl
Tinnie Run
Don't Piss In My Pocket and Tell Me It's Raining
He Likes To Play The Drums
Sayonara Mr Craig!
The Floundering Bismark
He's Got a Vibroslap
Catharsis
Ned Belly
Dick Gossip
Cumberland Square Eight
All The Rage
Banks of the Allen
Leakage
Calliope House
Customer questions

Yes we can. We are able to include a number of covers from the likes of Pogues / Dubliners etc.

Our preferred line up is Accordion, Violin, Guitar, Drums & Caller but we can go out with less musicians for a cheaper price

We are flexible and play each booking by ear to ensure your event runs as smoothly as possible. If timings change just let us know.

Absolutely. This is a really popular request and we actually offer this service for free. If you'd like to plug a devise in with a playlist via our PA after the final set until the venue closes, we can provide this for an additional charge.

We will arrive around an hour before start unless requested otherwise to set up ad sound check. As soon as the PA is set up, we can plug a devise in with your playlist or our own to help set the atmosphere and get people ready for the live usic.

Yes a Caller is included within our quoted fee.

Of course you can

Yes we will supply PA and some lighting.

We can if you give us enough notice.

We're lively and really enjoy what we do and that comes across in our performance.

Absolutely fantastic! I booked Rufus Return for a charity event where the age range was from 4 to 80 years young! A lot of of those attending had never been to a Ceilidh and they are now raving about it and asking when the next one is! Nigel and the band paced everything well to the crowd and I can’t recommend them highly enough! Already looking for dates for next year and will definitely book Rufus Return! Thank you guys so much for a great night!

I would just like to thank you and the Rufus Return Band for entertaining Corhampton GC members and guests so well on Friday night. We had a fabulous evening and many of the members have been back in touch to ask me to pass on their thanks. It was a great evening! You, the band, and Tom were patient, professional and good fun. Thank you. The House, Bar and Social Committee will be rebooking for a date in '21. Please use us as an endorsement for other enquiries. Best Regards Jackie

21st birthday party Andover "Hi Brendan, thank you so much to all the Rufus Return band, we had a great night, thoroughly enjoyed by all, and I do hope you didn't get too cold beforehand... Thanks also for your flexibility with timings and announcements, planned or spontaneous!

School Fundraiser Chichester "Thank you so much for making our Barn Dance on Friday night such a success! Great fun and great exercise!! The music was fantastic, we were all very impressed by your skills and your instruments, especially the funky violin!! We raised approx. £500.00 which will be extremely useful for the School in times of low budgets. We have had requests for another Barn Dance asap , so please may we use you again!! Many thanks to you all Best wishes Alison x

irthday Party Winchester "BIG thank you to Nigel & his band for last night. They did a fantastic job - the dance floor was never empty. A lovely evening for all our guests

Wedding Minstead "Thank you SO much for coming to play at our wedding in Minstead. We had the most amazing day & the ceilidh really was the perfect way to spend out evening. I know all opf the guests had a brilliant time and lots of people have said how well you played and what a fab caller you are Brendan. I shall be thoroughly recommending you to anyone who asks! Thanks again, you really did help to make our day completely unforgettable.

Wedding Winchester "Just to say THANK YOU so much! We had a brilliant wedding and great fun dancing. Even Ed with his knee! All the guests said how much fun it was. Most had never heard of a ceilidh. Please pass on our thanks to the band.

Wedding Salisbury "Just wanted to email to say thanks for playing at our wedding on the 18th May. The music was great and everybody had a great time. You did a great job of getting people up and dancing, both Charley and I wanted to stay and dance longer when we had to go."

Wedding New Forest "Just a quick note to say a huge thank you to you and the band for our wedding. You were amazing and everyone loved it. It really got people up and dancing, but more importantly having fun!! Please extend our thanks to the band as well, they were exceptional...a very talented bunch. Thanks again Jon&Sarah

Private Function Ringwood "Thanks Rufus for a fantastic night on 31st oct with Brendan and co. It was great music, the band were lovely and Brendan was a master at calling and judging the mood etc. Really helped make the evening very special. I'm still getting messages from people saying they haven't had so much fun for years!! May the barn dance live on!! Thanks again to all, Helen and David

Private Function Chichester "Hi Brendan Thank you so much for such a fantastic evening on Friday! I am so sorry I didn’t meet you but sadly my husband and I were both laid low with colds. Please pass on our thanks to the rest of the band and hopefully next year we will host another. Best wishes Alison Nicholds

Private Function Beaulieu "Hey Brendan and the band, Thank you so much for last night. You guys were amazing and we have had loads of compliments from friends and family. We will definitely be booking you up again for family do's and recommend you to others. Nick apologises for not getting a chance to see you to say hi or bye properly! All the best Sarah x

Private function Waterlooville "Hi, Just wanted to email to say thanks for playing at our wedding on the 17th May. The music was great and everybody had a great time. You did a great job of getting people up and dancing, both Charley and I wanted to stay and dance longer when we had to go. Thanks Jack and Charley

Private function Totton "Dear Brendan, Polly, the legend Phil, Danny and Ian, Thank you all for a truly amazing fun filled 40th birthday celebration on Saturday. Everyone said they had such a brilliant time and commented on how talented you guys all are. Thank you for making it such a memorable occasion. Guests remarked they haven’t laughed so much in ages. I am thrilled that nearly everyone felt compelled to join in, even my non dancing husband. Which was a massive feat! I’m so glad that I chose your band to play at my party, based on the feedback , you more than exceeded my expectations, you sound phenomenal and were exceptional value for money. You guys were absolutely incredible, thank you so much. Kindest regards and all good wishes,